LowKickMMA.com
Home UFC News Islam Makhachev confidently picks his round against Charles Oliveira: “Third round get... 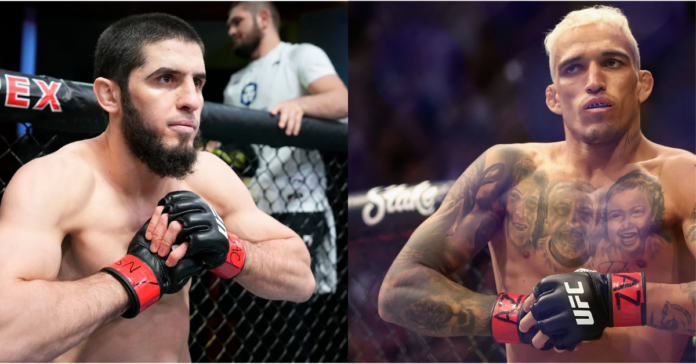 Islam Makhachev and Charles Oliveira are heading into their highly anticipated showdown at UFC 280 for the vacant lightweight championship. On Twitter, the 22-1 Russian-born MMA fighter mapped out how he sees this title fight going.

“First round warm up, second round drag him to deep water, third round get business done Inshallah ✅ Can’t wait for Oct 22.”

Dagestani-born former champion Khabib Nurmagomedov retired, undefeated, and relinquished his UFC title in 2020. Nurmagomedov and Islam Makhachev are training partners and when this fight was announced earlier this year, the Russian athlete said:

The Brazilian-born Charles Olveira had a long road to UFC gold. He made his promotional debut in 2010 and had a mixed record in the organization, trading wins, and losses. After he changed weight classes and fight camps, he earned eleven wins consecutively and a UFC world championship title.

UFC 280 Charles Olveira vs Islam Makhachev for the vacant title

Charles Olveira put together an incredible win streak having victories over fighters such as Justin Gaethje, Dustin Poirier, and Michael Chandler, all via finish. He was the UFC lightweight champion up until his title match against Gaethje in May of this year. He missed weight and was stripped of the title and was unable to compete for the belt during the fight. The Brazilian athlete won the fight but the title remains vacant.

At UFC 280 on October 22, broadcast live from Abu Dhabi, Charles Olveira and Islam Makhachev will be fighting for the vacant UFC lightweight championship title. It is a battle of number one versus number two at lightweight for the UFC 280 main event fight.

Also featured on UFC 280 will be a UFC Bantamweight Championship fight with Aljamain Sterling looking to defend his title against the former champion TJ Dillashaw. Additionally, Sean O’Malley will face the stiffest test of his career when he meets Petr Yan.

UFC 280 looks to be a major event for the UFC with high-ranking athletes facing off, plus two title fights in the main and co-main event positions.