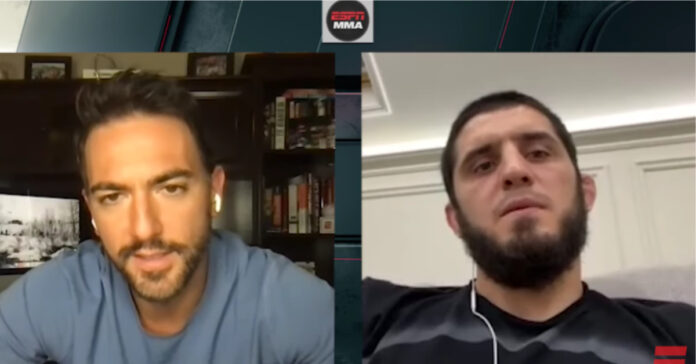 No. 4 ranked UFC lightweight Islam Makhachev is gearing up for his first UFC world title opportunity when he meets Charles Oliveira for the vacant lightweight championship.

Before stepping into the Octagon at UFC 280 for his main event showdown with ‘Do Bronx,’ Makhachev discussed Leon Edwards‘ historic fifth-round knockout of ‘The Nigerian Nightmare’ Kamaru Usman to capture the UFC welterweight title. With a comeback straight out of an inspirational sports film, fans and fighters have not stopped talking about Edwards’ come-from-behind victory. However, not everyone was impressed.

Speaking with ESPN’s Brett Okamoto, Islam Makhachev believes that ‘Rocky’ was “lucky” and that a trilogy bout with Kamaru Usman will result in ‘The Nigerian Nightmare’ reclaiming the welterweight crown.

“Edwards [got] lucky because [Usman] beat him all five rounds, almost,” Makhachev said. “First round, [Edwards took] him down, take his back, but other rounds [Usman] beat him very easy, took him down many times and smashed him there. When they’re going to fight again in rematch, 100 percent I think Kamaru is going to beat him because Edwards have same problem, always with wrestling guys.”

While most have marveled at Leon Edwards’ brilliant set-up that led to the massive head kick knockout, Makhachev appears to believe it was nothing more than a fluke.

Islam Makhachev believes it’s his time to shine in the UFC. As the chosen successor to UFC Hall of Famer Khabib Nurmagomedov, many are curious to see how the Dagestani fighter stacks up against a competitor like ‘Do Bronx’ who will be by far his biggest challenge thus far inside the Octagon.

Of course, Makhachev doesn’t see it that way. In an interview on EPSN’s ‘DC & RC‘ Makhachev believes that Oliveira’s recent success is a direct result of fighting opponents with little to no grappling.

“He’s lost in the UFC seven times. He’s not gonna be upset if he loses one more time. People finished him seven times in the UFC and this guy’s champion in my division. I’m very upset because of [this].

“Everybody who says Dustin Poirier or Justin Gaethje or other guys … they’re all guys that are old, they have money, they don’t challenge,” Makhachev said. “We have new blood. Me, [Mateusz] Gamrot, Beneil Dariush, these are really tough guys for him. Because Dustin Poirier or Justin Gaethje, they’re never grappling, just striking. That’s why this is easy fight for him. But he knows Islam Makhachev is a very hard fight for him.