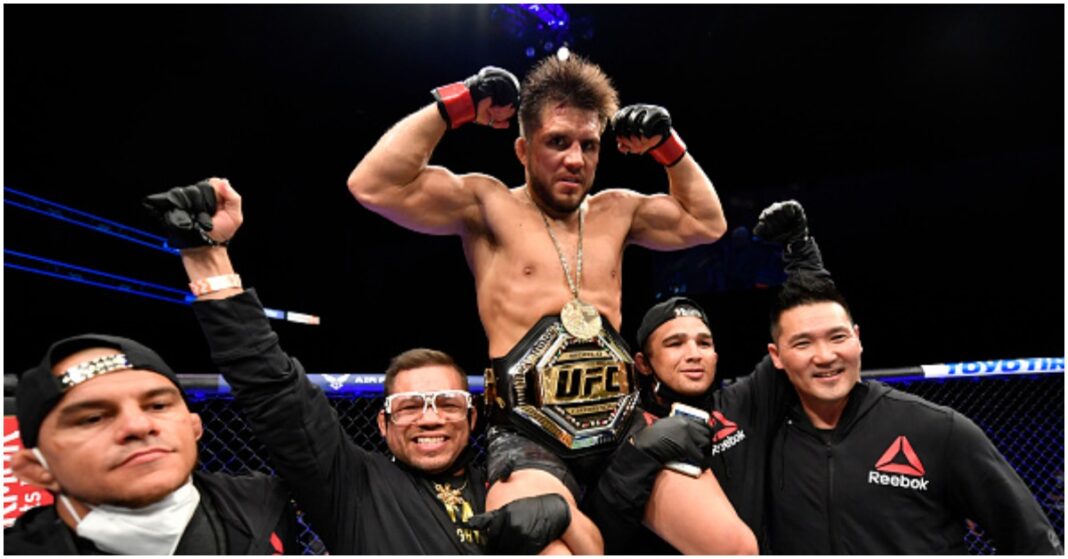 It sounds like we can expect to see Henry Cejudo back in the Octagon sooner rather than later.

Renowned MMA coach Eric Albarracin appeared on The MMA Hour with Ariel Helwani and confirmed that his most decorated fighter is planning a return to the UFC with some fairly big ambitions.

“Triple C will officially become C4 this year,” said Albarracin. “He is back in the USADA (U.S. Anti-Doping Agency) pool. He dove head first into it. You know Henry comes from the Olympic Training Center been tested since he was a sophomore in high school so he’ll be good to go as soon as the USADA, I guess that period of testing is done.”

“He’ll be good to go. He’s already in training, said Albarracin. “You know, Henry never really stopped training. When Henry was coaching, it was awesome. He was there every day and sometimes, you always hear that athletes, when you become a coach, you become better, but you’re still not in your prime. It’s hard to go back. Henry is still in his prime. He became a coach, one of the best coaches in the game. You saw what he did with Figueiredo. You saw what he did with Zhang Weili. He helped bring on Jon Jones and Jiri Prochazka. I mean, this guy was putting in work.

“Now he’s learned, he’s studied and now he’s got the opportunity to come back and he’s coming for more gold for sure.”

Henry Cejudo Is Coming Back for More Gold

When asked if Henry Cejudo would be returning with featherweight gold on his mind, Albarracin confirmed that a showing at 145 was one of their goals, but ‘Triple C’ would initially set his sights on the UFC’s bantamweight champion Aljamain Sterling.

“The word on the street is 35, so I think he’s coming after Aljamain,” said Albarracin. “But I do think if he comes back and gets the 135 title, he can move up and an immediate world title shot at 145 whether it’s Volkanovski or Max Holloway.”

Albarracin also stated that Cejudo expects to return for an immediate title shot as early as October when his USADA testing period ends.

Cejudo retired from mixed martial arts after defeating Dominick Cruz at UFC 249. Cejudo went 10-2 under the UFC banner, winning both the flyweight and bantamweight championships in the process. Since his retirement, Cejudo has made appearances for Khabib Nurmagomedov’s Eagle FC promotion and All Elite Wrestling.

Are you excited to see ‘Triple C’ Henry Cejudo return to the UFC?