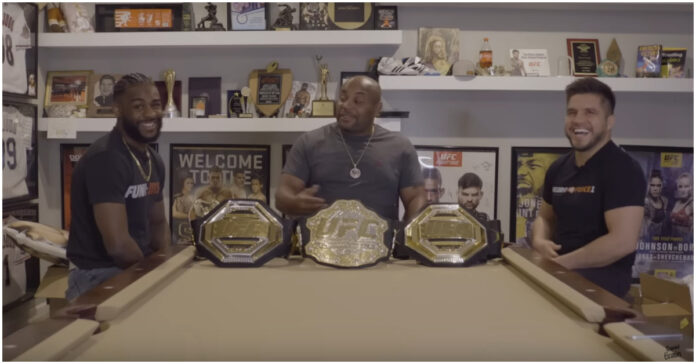 UFC bantamweight champion Aljamain Sterling sat down with Henry Cejudo to discuss the possibility of their upcoming title fight.

Aljamain Sterling retained his 135-lbs belt against Petr Yan last month in a rematch over a year in the making. Going into the bout as a massive underdog, ‘Funkmaster’ proved the doubters wrong. Following the contest, he was called out by the former two-division champion Cejudo for his next fight.

In a recent sitdown on The DC Check-In show, Henry Cejudo sat across Aljamain Sterling as they discussed each other’s fighting capabilities. ‘Triple C’ doesn’t seem to be a big fan of Sterling as he expressed his analysis on the current bantamweight king.

“Too many flaws,” Henry Cejudo said. “Well, we’re going to end up fighting but I’m going to expose that. He’s got a lot of flaws. As good as he is, he’s got an ability to him, and I think that’s his greatest asset, his limbs. I still don’t think he really understands his whole capability just yet.

“Think about it this way, I’m 5’4 small, short but I know how to fight people where people don’t touch me. I know how to wrestle people. I’m a better competitor than I’m a fighter so when I see a guy like Aljamain Sterling, I’m just like, ‘that’s easy money.'”

Daniel Cormier took the comments to the ‘Funkmaster’ to inquire how he felt about being judged as “incomplete” even though he’s on top of the food chain.

As Sterling began to defend his abilities, Cejudo chimed in to ask the 32-year-old for advice for himself. ‘Funkmaster’ made a fair point of not being able to critique Cejudo as well since he has been out of action for two years now.

Cormier brought up the topic of Sterling’s less than stellar performance in his first fight with Petr Yan. Henry Cejudo shared his thoughts on Sterling’s shortcomings in that fight and praised him for coming out on top regardless.

“But what I will say about this dude is, he’s a winner. He found a way to beat this dude.”

Cejudo does not consider Sterling to be the best even though he’s the champion.

“He’s got the belt but he ain’t the best in the world,” Cejudo added. “It’s like this dude, there’s been guys that have had UFC belts that were kinda granted that. Don’t get me wrong, he’s the world top but when it comes to saying, who is the best in the world it’s hard for me to pull myself aside and say that.

“When I lost to Demetrious Johnson, that motherf**ker is the best. That’s a bad dude. That’s a dude that I knew I had to chase. I don’t feel that with Aljamain.”

While Cejudo is back in the USADA pool, his return fight to the UFC remains to be confirmed. He has called for a title shot against Sterling which seems more likely than his other callout of UFC featherweight king Alexander Volkanovski.

Would you like to see Henry Cejudo fight for the bantamweight strap?