LowKickMMA.com
Home UFC News Dominick Cruz Shares Some Words of Wisdom for Khamzat Chimaev: ‘You Got... 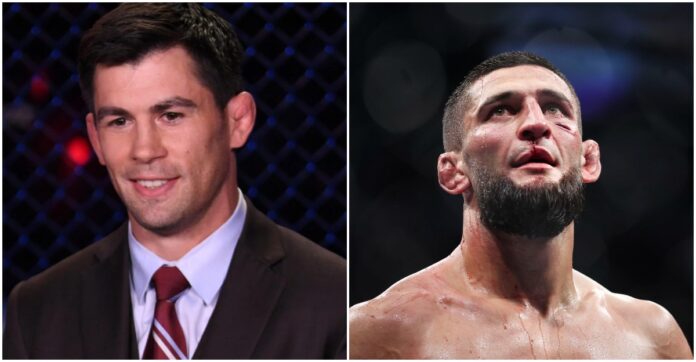 Not many active UFC fighters on the roster possess the wealth of knowledge that Dominick Cruz holds. The 37-year-old cared to share some of that wisdom with rising sensation Khamzat Chimaev.

Dominick Cruz has been competing in mixed martial arts since 2005 and has one of the most accomplished careers in the sport, attaining the UFC bantamweight championship twice. His most recent outing came against Pedro Munhoz at UFC 269, which saw the veteran earn a unanimous decision win.

Sweden’s hottest talent, Khamzat Chimaev, has made a huge impact across the board since entering the UFC. Chimaev had demolished his opposition with ease, until of late when he met with Brazilian Jiu-jitsu practitioner Gilbert Burns in a fight of the year candidate. Chimaev edged a very close decision on the judge’s scorecards to remain undefeated.

In an interview with Helen Yee Sports, Cruz commented on Chimaev’s rise within the sport so far and gave his thought’s on his future:

“I think Khamzat’s rise is going to be big. I think what’s going to make the big difference for Khamzat is, from here, with all the fame, with all the light, with all the praise, with everybody talking about him, who does he choose as his leader. I think if I could say one thing that’s going to dictate the future of Khamzat, is who does he shut out and who does he trust and listen to. Right now, you’re going to get all the leeches in the entire world coming to tell you why you need to coach and train with them… You got to stick with the people who started you, those are your leaders.”

When asked who Chimaev would face next, Cruz also detailed an intelligent answer:

“If he finds the right leadership, they’ll make that decision for him. It’s not up to me, it’s not up to the UFC, it’s not up to Khamzat. I don’t make those decisions, my leaders do for me… I’ll pray that Khamzat does that for himself and his future.”

If Cruz talks, you listen. Some notable advice from someone who has acquired a textbook of experience in the fight game. Still, something Chimaev is more than likely aware of.

Do you agree with the advice given by Dominick Cruz?