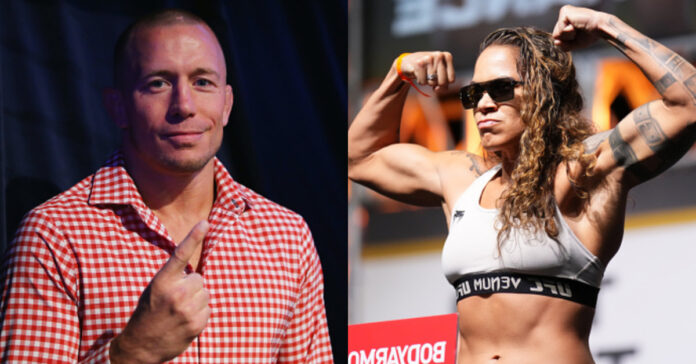 Pena shocked the world when she defeated the general consensus women’s ‘GOAT’ in December at UFC 269. Pena scored a second-round rear-naked choke to upset ‘The Lioness’ last winter. Now in the midst of the summer heat, the two will square off once again, each with something to prove.

Ahead of their main event showdown, UFC all-time great Georges St-Pierre spoke with EPSN MMA about the impending rematch, specifically what it will take for Amanda Nunes to recover from the devastating loss she suffered in their first outing.

“Losing is part of life and when you lose as a champion, you fall from very high,” said GSP. “However, you need to be able to put that behind you and learn from your mistakes and I believe Amanda has a chance to redeem herself and maybe she can come back even better than she was.”

Georges St-Pierre knows a thing or two about recovering from a devastating loss. In 2007, ‘Rush’ was upset by Matt ‘The Terror’ Serra via first-round knockout in their UFC 69 bout. One year later at UFC 83, GSP settled the score, earning a second-round knockout of Serra. While some athletes, like GSP, have been able to come back better following a shocking loss, it’s not always that easy. For Ronda Rousey, her loss to Holly Holm at UFC 193 seemed to break the fighter’s spirit resulting in her exit from the sport entirely a little more than a year after.

“The reason I believe some athletes never come back the same is because they lose their confidence. In the fight game, confidence is one of the most important things. If you have all the skills in the world, but you don’t have the confidence, it’s a little bit like someone who has a lot of money in his bank account, but no way of accessing it. You need the skills and the confidence.”

Continuing to speak with EPSN MMA, Georges St-Pierre discussed the importance of staying hungry in the face of fame and fortune. Something that athletes like Conor McGregor have struggled with according to the MMA community. Since the Irishman’s rise to the top of the combat sports world, he has struggled to get in the win column. UFC president Dana White was critical of ‘Notorious,’ suggesting the fighter has lost his hunger and believes the same could be said about Nunes following her UFC 269 loss.

GSP stressed the importance of staying hungry and maintaining that desire to be the best in the world. Without it, Nunes will likely never return to the same level.

“It has to do with how she is mentally,” said GSP. “If she’s still ready to get out of her comfort zone in order to improve and to go through a hardcore training camp. She’s been doing it for years. I know her life changed since the beginning of her career. It’s important for her to remain hungry, but if she’s not hungry, she’s not obsessed about being the best, she will not be able to perform at the same level as she did. I think we’re gonna have the answer tonight.”

Despite the decisive loss in their first meeting, Amanda Nunes steps into UFC 277 as a -300 favorite. Fans clearly believe that ‘The Lioness’ will show up in Dallas, Texas ready to reclaim her bantamweight title. Do you believe Amanda Nunes will redeem herself on Saturday night?