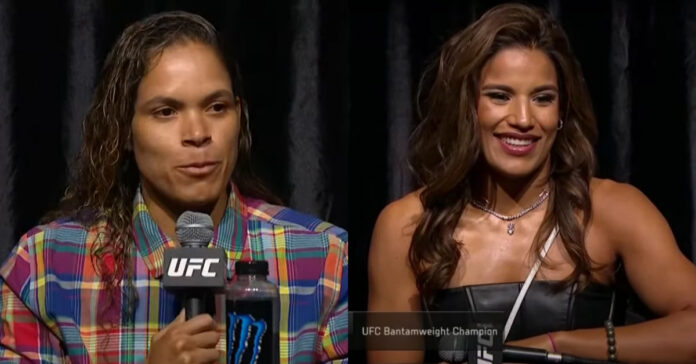 Julianna Pena accused Amanda Nunes of spying on her earlier this week.

The reigning UFC women’s bantamweight champion will collide with the former two-division champion Nunes in a highly anticipated rematch at UFC 277 on July 30 in Dallas, Texas.

During the UFC 277 pre-fight press conference, Pena continued to fire shots at Amanda Nunes, dismissing her credibility as the once-dominant champion.

“Fedor Emilianenko has an aura,” Pena said. “Mike Tyson, Dana White, they have auras. I don’t know about this aura that you speak of with Amanda Nunes, I’m not seeing it.”

Nunes responded to claims of spying on Pena’s training camp in the build-up to their rematch.

“One time, I was walking, I saw her training, yeah. What is the problem in that?” she added. “I walk in, I saw, okay, and I went to my locker room. It was an accident.”

Nunes wants to be double champ again before retiring

When asked about her motivation to still keep going after achieving essentially everything in the sport, Nunes explained what caused her to restructure her training camp and switch gyms to get better.

“Honestly, how I lost I couldn’t take it,” she said. “So, I went back home and I have to do this again. I make all the adjustments and the changes that I was supposed to do and I jumped camp.

“And being a champion is very good. I know the feeling she’s feeling right now. I’m still a champion too I know that feeling so I want to become a double champion again. That was my main thing. I had to go back go to the gym, fix everything, get everything under control, and come back here.”