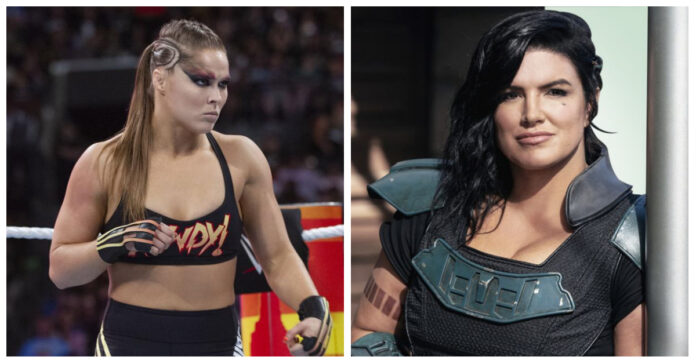 Gina Carano has not shut the door on a future fight with Ronda Rousey.

Women’s MMA pioneer Gina Carano believes an outing with Ronda Rousey is always on the table although not very likely. The Elite XC and Strikeforce veteran has not competed in over a decade with her final appearance coming in August 2009.

Ronda Rousey is widely credited for the rise of women’s MMA in the mainstream. She kicked off the proceedings in the UFC despite president Dana White once stating that women would never fight in the promotion. ‘Rowdy’ became the biggest sensation in the sport rivaling only fellow superstar Conor McGregor and even eclipsing him at the time.

Ronda Rousey says she might return only for one opponent

Rousey’s stock in the sport plummeted after she dropped two in a row in her final bouts against Holly Holm and Amanda Nunes. Her reaction to the losses made it clear that she would be turning away from the community as she switched over to professional wrestling.

In a recent appearance on The Kurt Angle Show, ‘Rowdy’ said that she could return to fighting but only for one opponent.

“I will always be forever grateful…and if she ever was like, ‘Ronda, I wanna fight you tomorrow at 205 pounds,’ like whatever the hell she’d want – I’m not saying she’s 205 pounds – if she wanted to come into my backyard and do the Rocky thing or, you know, ding, ding and we just do it in the backyard, I don’t care.”

“I will fight Gina wherever she wants and if she doesn’t want to forever, leave (that there). It’s a respect thing, not like a, ‘f*ck you. I’m not coming to get you’. It’s just like hey, if you ever wanna pull that card out, it’s there. I love her. Thank you, Gina, for everything you’ve done.”

‘Conviction’ shared her reaction to Rousey’s statements in an appearance on Unfiltered with Dan Bongino. She left the door open for a fight down the line. Keeping that option open for herself even if it doesn’t happen is the way to go for the Hollywood star who also said that she would like to hire the former UFC women’s champion in one of her movies.

“You know what? Just never put it past me. It could happen,” Carano said. “It would be six months from now because I have a lot of stuff I need to do …. I really want to create, I want to direct, I want to produce…

“I want to give Ronda Rousey a job in one of my movies so maybe there is something we can do there.” (h/t Overtime Heroics)

A potential showdown between the two women would make for an epic fight given their status in the history of the sport. Rousey still competes in pro wrestling under WWE while Carano continues to increase her creative footprint with more movies.