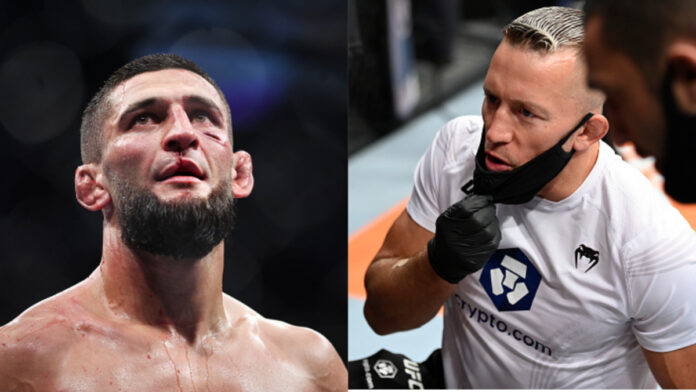 While the return of Georges St-Pierre has had MMA fans on the edge of their seats for years now, it sadly seems we are unlikely to ever witness such a spectacle.

If we ever did though, GSP has said it will be to prove he is truly the greatest mixed martial artist of all time. In a legendary battle against somebody he believes is currently the greatest, such as a Kamaru Usman, Khamzat Chimaev, or Khabib Nurmagomedov.

At UFC Vegas 58, St-Pierre appeared to show support to his fellow Canadian, Aiemann Zahabi, who was facing Ricky Turcios that night. Zahabi would emerge victorious from the cage, but on the sidelines, an interesting interview was taking place.

A multi-division UFC champion and somebody that has the character of a true role model, GSP is virtually a consensus pick for the GOAT debate.

“Maybe Usman, Chimaev, and… Khabib, if he would still be there.” Georges St-Pierre continued. “But, unfortunately for me and for the fans and everybody, it’s not gonna happen. Because I’m done. And I don’t miss it at all!”

From the man himself, a fabled return will allegedly never happen. It’s bittersweet, as GSP ended his career at his peak. The opposite of what some fighters do, continuing to fight well past their prime, with failing chins and diminished skills.

But, it also could feel like GSP is leaving some questions unanswered. Maybe a battle with Khabib Nurmagomedov would’ve put a bow on both men’s careers, or maybe things were meant to end as they did.

If It was up to you, would GSP stay retired, or come back for a final fight?