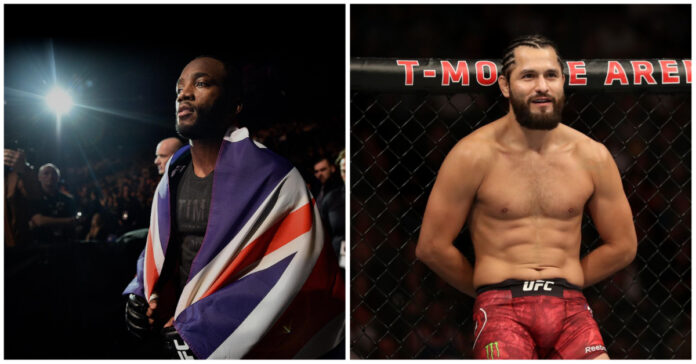 Leon Edwards has called for his first title defense to take place in the UK against Jorge Masvidal provided he can dethrone the current champion, Kamaru Usman, this weekend at UFC 278.

Leon Edwards has finally got his opportunity for gold this weekend when he takes on Kamaru Usman in the main event of UFC 278 for the welterweight belt. Both men have been taking out the competition within the 170-pound division following their first meeting which took place back in 2015. Usman who remains unbeaten inside of the UFC is looking to continue his dominant reign at the top of the division whilst Edwards has acquired himself a ten-fight unbeaten streak since losing to the champion.

If successful, Leon Edwards wants to face longstanding rival Jorge Masvidal, with the pair having clashed back in 2019 at UFC London following respective victories that night. Masvidal caused a cut under Edwards’s eye during the altercation that took place and therefore it comes as no surprise that ‘Rocky’ would like the opportunity to return the favor.

The two men have since been scheduled to face each other however it was Masvidal who was forced to withdraw from the bout due to Injury. Leon Edwards has welcomed the opportunity to face Masvidal provided he can get past Usman this weekend.

“That guy is a bum, I didn’t see his call out but he’s a bum anyway. He’s just looking for another title shot, but I’ll grant him his wish after this fight. I want it in the UK, I’ll give the bum the opportunity to come fight for the title just to show everyone how s*** he is.”

Edwards would be only the second British champion in UFC history if he is able to find victory at UFC 278. The only other man to lay claim to having done this, Michael Bisping, believes ‘Rocky’ has what it takes to dethrone the current champion, Kamaru Usman.

Although Leon Edwards would welcome the chance to face Jorge Masvidal it appears as though ‘Gamebred’ does welcome the challenge but does not see it being for the welterweight strap. Speaking to MMA fighting, the UFC veteran believes Kamaru Usman will come out successful over the Brit this weekend at UFC 278.

“I don’t [see Edwards winning] to tell you the truth. It’s a fight, anything can happen. There’s no 1,000 percent winning for anybody in this sport. I don’t care if you’re undefeated. It’s just a matter of time. I think Usman wins more times than Leon wins if they were to fight five times.”

“I think Usman is a little more complete and at the end of the day, it will come down to the wrestling. On the feet, Leon’s a little bit more polished, maybe a little bit more variety with setups or attacks, but Usman’s wrestling, I think he’ll keep Leon honest to where he won’t open up as he would with a lot of guys. I see Usman winning.” (Transcribed by Mirror)

Regardless of the outcome of the UFC 278 main event this weekend, this is one fight fans will be wanting to see.

Who do you see coming out victorious in the UFC 278 headliner this weekend?