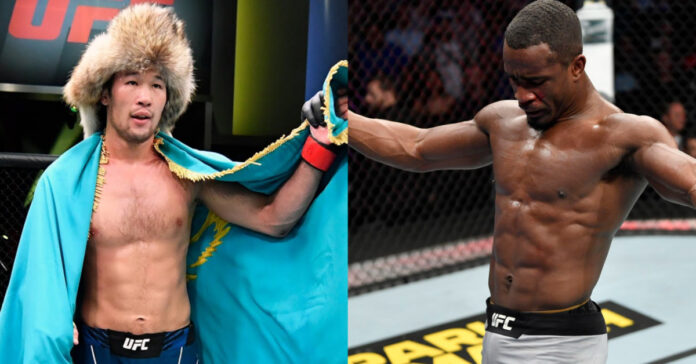 ‘Handz of Steel’ Geoff Neal is about to have his hands full. The US-born athlete has agreed to a matchup against the undefeated welterweight Shavkat Rakhmonov. The two UFC fighters have agreed to a fight against one another on Twitter.

“I don’t blame you for doubting yourself, but when are you going to accept the fight offer @handzofsteelmma [Geoff Neal]? “

The 15-4 welterweight Neal responded with an agreement and a warning. He said:

“Had my team call Sean this morning. Be careful what you wish for. See you soon 😤 @Rakhmonov1994 [Shavkat Rakhmonov]”

‘Nomad’ Shavkat Rakhmonov is an undefeated hot prospect rising through the competitive welterweight division. At 27 years old, the Kazakh-born fighter has put together an impressive record unblemished at 16-0. He will look to rise through the welterweight rankings further by fighting the 6th-ranked Geoff Neal.

The Fortis MMA trained Neal has fought a who’s who in the welterweight division. The American fighter holds notable wins over fighters such as Vicente Luque, Santiago Ponzinibbio, Mike Perry, Niko Price, and Belal Muhammad. Although in his UFC tenure, the 32-year-old athlete sustained two losses to Stephen Thompson and Neil Magny.

Kazakhstan’s Rakhmonov is just coming off a win over Neil Magny, in his most recent fight, via submission in round two. In fact, none of ‘Nomad’s victories have seen the judge’s scorecards. This young athlete has a one-hundred percent finish rate on his record. Exactly half of his wins were earned via submission and the other half were won by way of KO/TKO.

For the Kazakh fighter, he has had success in his callouts thus far. Earlier this year he called out China’s Li Jingliang, who did not accept the fight. But he also called out Neil Magny who he then later defeated. In March of this year, on Instagram, the normally quiet fighter shared:

“Peace be upon you! Now I have a couple of fighters in my sights, one already refuses to fight me, and the second claims that he is ready to fight anyone. @lijingliangmma get your balls together and fight! @neil_magny170 you said you were ready to fight anyone, let’s do it if Lee still doesn’t have the guts to.”