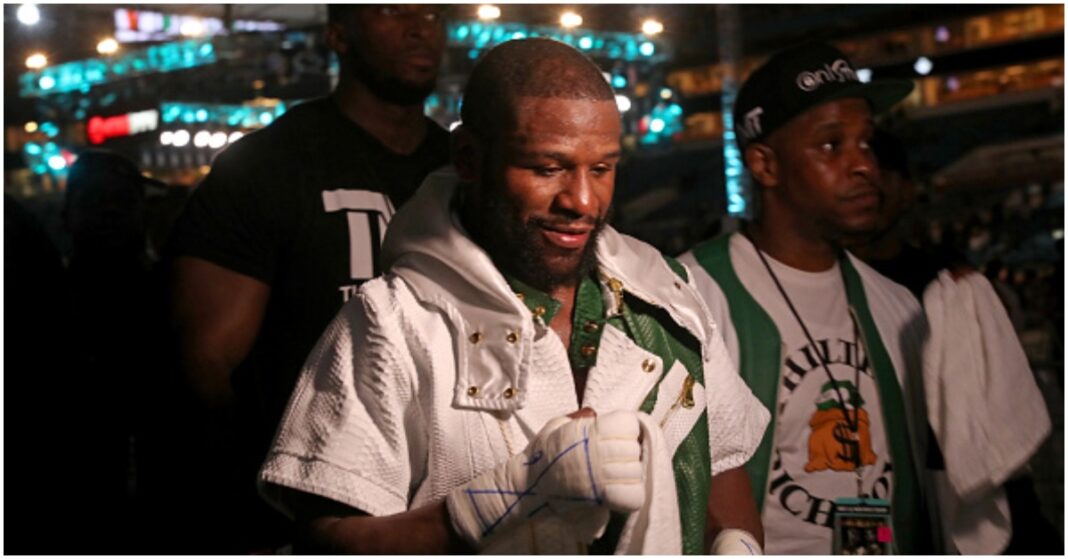 Floyd Mayweather put on a show for the crowd in Abu Dhabi during his exhibition boxing match with Don Moore on Saturday.

“Money” was in classic form during his eight-round exhibition bout. During the first two rounds of the contest, we saw Mayweather playing it safe, walking backward, defending, and counterstriking. Once into the third round, Mayweather began to open things up, pressuring Moore to the ropes and throwing everything in his arsenal.

By the time we got to the halfway point of the contest, Mayweather was having the time of his life. “Money” could be seen dancing and assisting the ring card girl between rounds. Mayweather even got a rise out of the commentary team by directly responding to their comments mid-fight.

“This is one of the things Floyd does best by the way, his psychological warfare,” said one member of the broadcast team.

Mayweather without hesitation responds by saying, “I do do that,” causing the commentary booth to erupt into laughter.

Floyd Mayweather was in full “Money” mode at that point, putting on a show for the crowd and entertaining himself. It didn’t stop there as following the sixth round, Mayweather decided to assist the ring card girl by taking the ‘Round 7’ card and walking it around the ring for the crowd to see.

When he wasn’t busy talking to the commentary team and giving a helping hand to the ring card girl, Mayweather was practicing his dance moves between rounds.

While Moore survived the full eight rounds, it was clear that he did not have the tools to take on arguably the greatest boxer of all time. Despite his antics in the ring, Floyd Mayweather got the job done in an impressive fashion and teased a return to Abu Dhabi in the future.

“I told the fans I’m here to entertain, have fun,” Mayweather said. “I will bring another fight here this year. Absolutely. It’s a secret. I don’t want to let the cat out the bag right now but we have an opponent.”