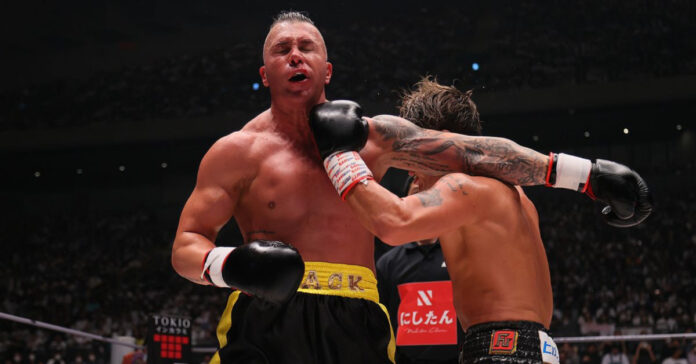 K1- Kickboxer Kouzi was able to stop Jizzy Mack, the bodyguard of Floyd Mayweather, in their exhibition bout at Super RIZIN. An event that also saw Floyd Mayweather himself emerge victorious against Mikuru Asakura via TKO in the second round.

Mack entered the bout with a 42-pound weight advantage over his opponent. However, that seemed to be the area of his downfall, as he rapidly began to fatigue during the second round, before ultimately being dispatched in the third.

Kouzi was able to land a combination of strikes which dropped Mack early on in round three. Despite winning his matchup, Kouzi admitted he was somewhat disappointed in his performance, claiming that with his experience he should have been able to overcome his opponent easier.

Holding a kickboxing record of 31-16-2, Kouzi had a wealth of experience to call upon in this matchup. Although he struggled to get past Mack’s attempts in the first round ultimately, he was able to find his rhythm and land the necessary shots that would see him stop Mack, who proved to be an awkward opponent.

Despite not achieving his victory in his matchup, Mack seemed to be still relatively pleased with the opportunity to go and compete in this exhibition bout and he would have been even more so after watching his boss, Floyd Mayweather, stop Mikuru Asakura in the second round of their matchup.

In the main-event match of Super RIZIN 38, Floyd Mayweather faced MMA fighter Mikuru Asakura in a three-round exhibition bout. The 30-year-old fighter holds a professional record of 16-3 in his MMA career.

The fight turned out as expected in what was a quick night at the office for Mayweather, Asakura was unable to land anything to put the undefeated boxer in any real danger while Mayweather comfortably was able to land his own shots and start to break down his opponent.

And as it seems those shots were beginning to have a damaging effect; Mayweather worked the body early on before landing a shot to the head just before the bell which saw Asakura unable to continue.

In his post-fight interview, Mayweather announced that he would like to return to Japan and RIZIN to compete once again. However, that will most likely take place after his next reported bout in which he is scheduled to take on YouTube celebrity and brother of KSI, Deji.

What were your thoughts on the matchups at SUPER RIZIN?