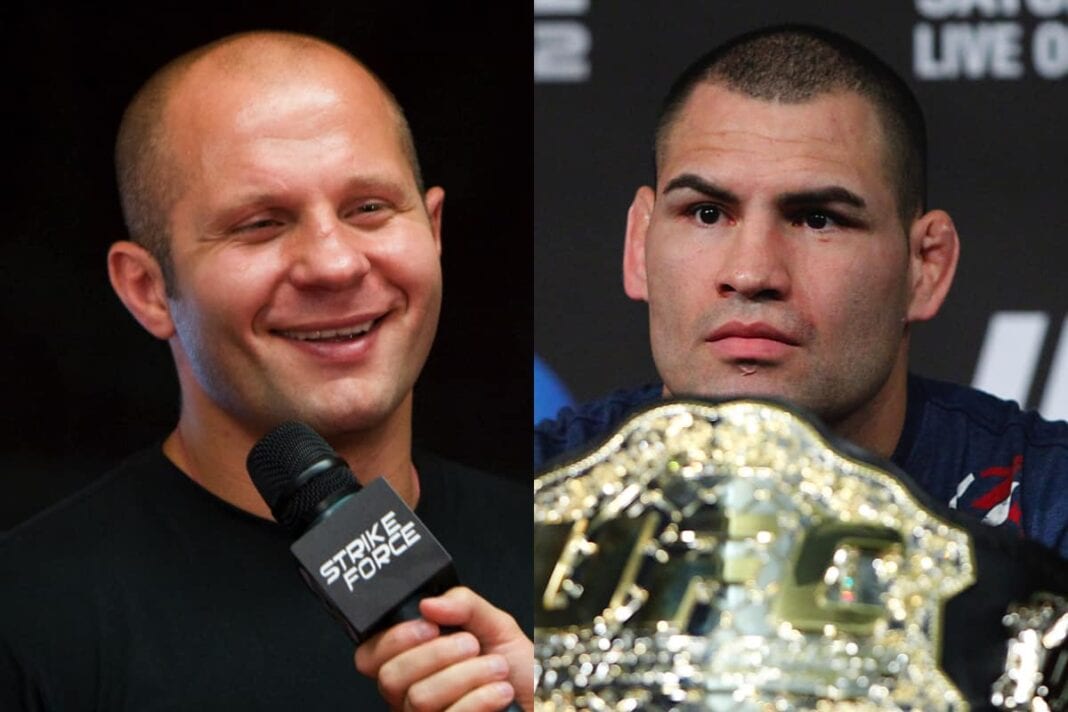 Any self-respecting fan of the sport can name the biggest fights their favorite fighters have had in the Octagon, but to get a full appreciation for their journey – to truly grasp how far they’ve come and what they’ve achieved – you have to go right back to the beginning and see where they came from.

By the time fighters reach the UFC they will often have had to prove themselves many times over in far less glamorous surroundings, often fighting for little or no pay in small, regional promotions as they attempt to build the reputation, experience and fight record that one day might lead to them getting their big break in the sport.

For this article we’ve scoured the internet to uncover footage of many of the biggest stars the sport has ever seen making their professional mixed martial arts debuts.

We hope you’ll agree that it makes for fascinating viewing, so sit back, relax and enjoy part two of our chronicles of MMA history being made!

At the age of 24, Fedor Emelianenko’s embarked upon what was to be an illustrious MMA career with his debut performance at ‘Rings Russia: Russia Vs Bulgaria’ in May of 2000.

Lazarov was also making his debut, and he literally got off to a shaky start as Fedor staggered him with his very first punch. Lazarov wisely decided to avoid more of the same by taking the fight to the mat, but the second time he did so it proved to be his undoing, as Emelianenko seized upon a guillotine choke submission that ended the bout.

Fedor would amass 11 fights in the Rings promotion before moving on to fight for PRIDE where he would become their reigning heavyweight champion and cement his status as one of the sports all-time greats with an unbeaten stretch lasting almost 10 years.

Frankie Edgar’s stellar MMA career would grow from humble beginnings, with his debut coming at an ‘Underground Combat League’ event held in a boxing gym in The Bronx, New York in July of 2005.

Edgar, who had a wrestling background, but only a few weeks of MMA training under his belt at the time, showed plenty of promise against another newcomer, Eric Uresk in a spirited scrap. ‘The Answer’ eventualling finished him by TKO from full mount, with a series of unanswered ground and pound strikes drilling his opponents head into the canvas.

Edgar would go on to compile a perfect 6-0 record in less than two years, which led to him signing for the UFC where he would become a lightweight champion. These days he plies his trade in the featherweight ranks where he is currently within touching distance of a title shot.

Unfortunately we don’t have heavyweight star Cain Velasquez’s first fight for you here, a first round TKO victory against Jesse Fujarczyk on one of the earliest Strikeforce shows back in October of 2006.

Instead, we have his second fight which came just two months later at BodogFight: St.Petersburg in Russia where he would go up against Jeremiah Constant, who had a respectable 4-0 record at the time.

Velasquez was already a star in the making at this point, despite the fact he’d only been training MMA for six months. He showed off his dominant wrestling, developing striking and excellent cardio in the fight as he easily picked Constant apart in the opening round, leading to a TKO finish via ground and pound strikes.

Up and coming heavyweight talent is hard to come by and the UFC wasted no time in securing Velasquez’s signature after this fight, despite his relative inexperience, and it proved to be a shrewd move as he’d go on to become a dominant force in the division and to date has won the UFC heavyweight title on two separate occasions.

Junior dos Santos was 21 years-old when he stepped into the ring to make his MMA debut at ‘Demo Fights 1’ in his native Brazil back in July of 2006.

The early stages of his fight with Jailson Silva Santos (who had only one win in six pro-fights) were largely forgettable as the two grappled on the mat. Don’t miss the finish though as it was particularly violent, with Dos Santos suddenly hurling his opponent to the mat and then blasting him with a brutal soccer kick to the head that knocked him out cold.

Two years later Dos Santos would surface in the UFC and leave a trail of destruction in his path en-route to winning the heavyweight title.

The footage in this video actually pre-dates Nate Diaz’s first ever professional fight, coming two years earlier in 2002 as he gained fight experience in a bare-knuckle, unsanctioned bout against an older fighter by the name of Robert Limon.

Diaz was just 17 years-old at this stage and working to develop his skills as a mixed martial artist, but he was still able to get the better of his opponent thanks to his superior grappling. He took the fight to the mat early, moved to full mount and landed a couple of ‘Stockton Slaps’ and then proceeded to seize on the armbar finish.

It’d be 2004 before Diaz made his pro debut in the WEC, and within a few years he’d make his way to the UFC after winning The Ultimate Fighter Season 5, and is now one of the most established stars on the roster.

Urijah Faber was 24 when he made his debut at ‘Gladiator Challenge 20’ in November of 2003, and apparently he already somewhat of a reputation as the commentators were rightly tipping him to become a future star of the sport.

Faber was able to make short work of Jay Valencia (1-2), briefly showing off his superior grappling abilities before tapping out Valencia with a guillotine choke, a submission that would continue to be one of the most dangerous weapons in his arsenal throughout his career.

’The California Kid’ would go on to fame and fortune in the sport, becoming a champion in the WEC, where he was the biggest star on the roster, and then enjoying a successful run in the UFC – though a title has so far eluded him there.

Kimbo Slice’s MMA debut was more high profile than most fighters given that he’d already become a viral internet sensation thanks to YouTube videos of his backyard brawling fights.

Elite XC saw his potential to drive ratings and signed him to make his MMA debut in November of 2007 against Bo Cantrell, who had a 10-9 record at the time and had lost three of his last four fights by strikes early in the opening round.

This was a fight tailor-made for Kimbo to win, and he did so in just 19 seconds, landing an early body shot and then a right hook to the head that floored Cantrell, who would then tap out to avoid further punishment.

While Kimbo has never fully lived up to his fearsome reputation during his MMA career, he has continued to be something of a draw in the sport, and at one time had a brief stint in the UFC.

Bas Rutten is a true pioneer in the sport of mixed martial arts and his debut dates as far back as the first ever Pancrase event in September of 1993, two months prior to UFC 1.

Ryushi Yanagisawa was his opponent here, and as Rutten notes in the commentary, the Japanese fighter was ranked fourth in his country at the time – but he wouldn’t last long against ‘El Guapo’.

Pancrase rules dictated that only open-handed strikes were allowed, and Rutten made quick use of that, flooring Yangisawa within seconds with a hard palm strike to the face. Still dazed, his opponent would get to his feet, only to be sent back down again soon after courtesy of a body kick, another palm strike to the head, followed by a knee upstairs that produced the KO.

Rutten would spend most of his MMA career in the organization, becoming a three-time ‘King Of Pancrase’ champion and then eventually moved on to claim the UFC heavyweight title before retiring.