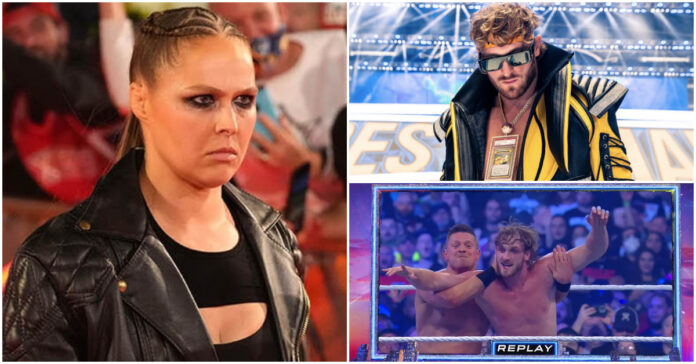 Although there were no major MMA or UFC events, the fighters shared their thoughts on Ronda Rousey and Logan Paul at WrestleMania 38.

Former UFC champion Ronda Rousey made her comeback in the WWE against Charlotte Flair for the SmackDown women’s title. Social media sensation Logan Paul made his pro wrestling debut in an impressive pairing with The Miz to take on Rey and Dominik Mysterio.

Ronda Rousey managed to make Flair tap multiple times with her signature armbar submission but ended up losing the bout as the referee was knocked out during the tap. Flair turned the tide after that to successfully defend her title.

Daniel Cormier showed his support for ‘Rowdy’ on Twitter along with a former rival in Cris Cyborg as well.

After going head-to-head with boxing legend Floyd Mayweather in an exhibition bout last year, Logan Paul made an impressive debut in his switch to pro wrestling. Being paired up with The Miz, Paul made sure to keep the attention on himself as he walked out wearing the most expensive Pokemon card around his neck.

Paul showed his wrestling talents with some interesting moves that were generally executed fairly well. He added insult to injury for his Mexican counterparts when he hit the three amigos on Rey Mysterio as well as a frog splash, imitating the great late Eddie Guerrero. The Mysterios were able to perform their signature 619 move on Paul.

Although Paul won the match, he received a ‘skull-crushing finale’ by his teammate following their victory at WrestleMania.

Check out some more fighter reactions to the event below.