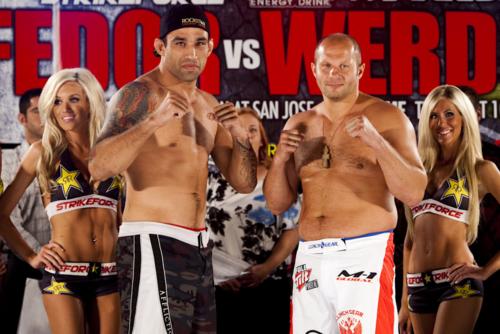 Fabricio Werdum is eyeing a rematch with heavyweight legend Fedor Emelianenko after picking up a win against Alexander Gustafsson in a fight which may be the last of his long and successful UFC career.

Werdum snapped a two-fight losing streak which stretched back to 2017 at UFC Fight Island 3. The BJJ specialist quickly forced Gustafsson to the floor before locking up the armbar submission.

During his post-fight interview Werdum became emotional while speaking to Dan Hardy. The fight was the final of his UFC contract and most likely his last fight with the promotion. The 42-year-old explained to reporters at the post-fight press conference why he was overcome with emotion, he said.

“The emotion was because this is my last fight in the UFC. I had many years with the UFC. I don’t know how many I had with the UFC, like 10 years (or) 12 years. You know? I’m a working individual – on Spanish commentaries. I think almost all of my life was here. I love UFC for sure. I want to say thank you to the UFC for many things.”

Werdum didn’t totally rule out staying with the UFC and no matter what happens he has vowed to keep on fighting.

“I don’t say ‘no’ because I have to talk to (my manager) Ali (Abdelaziz) first,” Werdum said. “Sometimes you lose the last fight in the UFC, and it’s like everything changes,” Werdum said. “You know? I don’t know if I’m staying in the UFC or not or maybe with a different (promotion). I won’t stop (fighting). One hundred percent I’m not stopping. I have a couple fights (left). I told you before, I’m very young. My mind is young.”

One fight Werdum is particularly interested in is a rematch with Bellator heavyweight Emelianenko he said.

Do you want to see Fabricio Werdum rematch Fedor Emelianenko?