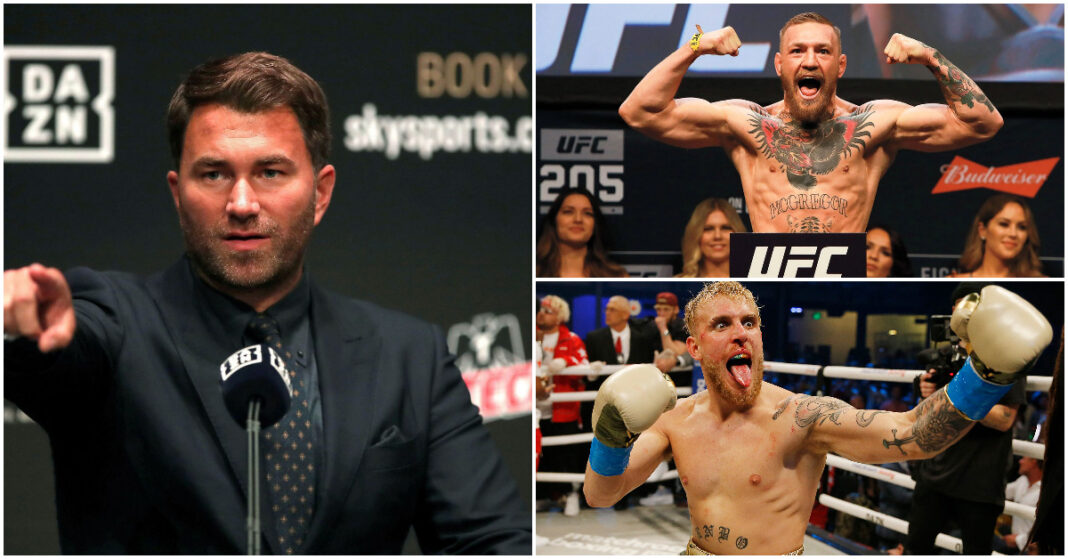 Eddie Hearn discussed why he would like to see a matchup between Conor McGregor and Jake Paul.

This past weekend, boxing promoter Eddie Hearn made history with Paul as they put on the first-ever female main event at the iconic Madison Square Garden. Hearn was promoting the Irish pioneer Katie Taylor while Paul was on team Amanda Serrano in their lightweight title showdown.

In a close-fought contest that had the fans on their feet over the ten rounds, Taylor managed to bag the win over Serrano after being wobbled in the fifth round. While Serrano officially lost the match, it was an event where there were no winners. Paul and her will go down in history books for the historic event they put on.

In an appearance on The MMA Hour post-fight, Eddie Hearn discussed his exchanges with ‘The Problem Child’ leading up to the fight. The two were bashing each other in the build-up and even made a bet of $1 million dollars before the fight. It seems like the two have put their differences to the side as Hearn heaped praises on the YouTube sensation.

When asked by Ariel Helwani about the idea of Paul facing ‘The Notorious One’, Hearn stated.

“I still like Conor McGregor against Jake Paul, but I mean, Conor is looking big these days.

“I don’t want to disrespect Conor because I really like him, but it’s the size that’s the problem. You know? Jake can fight, he’s explosive, can punch a little bit. But a lot of people don’t know, Conor was a decent amateur fighter, he does have good boxing fundamentals, much better than most mixed martial artists.”

“Nakisa [Bidarian] mentioned it to me, he said, what about Taylor/Serrano and Conor McGregor against Jake Paul? Same night.” (h/t GiveMeSport)

How likely is Conor McGregor to face Jake Paul?

After being sidelined for about a year from a horrific leg break he suffered in his last outing against Dustin Poirier, Conor McGregor looks to make his return to fighting this year. ‘The Mystic Mac’ has expressed his desire to fight current UFC welterweight king Kamaru Usman as well as a fourth fight with Poirier or a third fight with Nate Diaz.

McGregor is also called out by many fighters on the UFC roster who are more than happy to cash in on the payday. Amidst so many possibilities for his next opponent, Jake Paul does not seem to be a practical one. For one, UFC president Dana White will not be willing to work with Paul after the disparaging comments he made and also White’s sour history with cross-promotion.

As much as Hearn would like to see the fight happen, he echoes a similar sentiment.

“I’d like to see it. I just can’t see Conor and ultimately Dana, really, Dana is not gonna do a deal with Jake Paul.”

Do you agree with Eddie Hearn and want to see Conor McGregor take on Jake Paul?