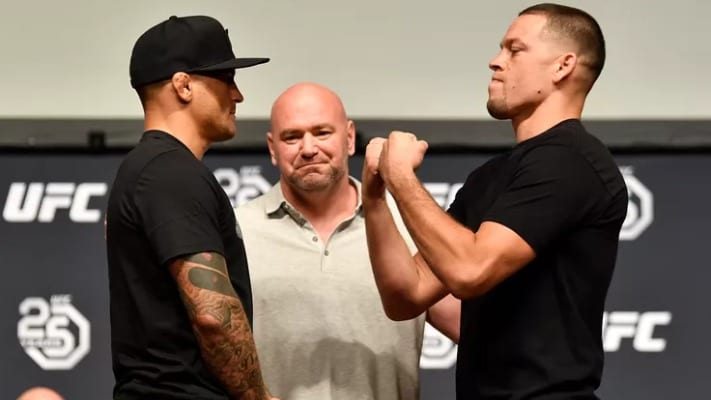 Dustin Poirier and Nate Diaz have been going back and forth on social media about a potential fight for the last few days.

‘The Diamond’ is fresh off his second successive win over Conor McGregor at UFC 264. Poirier is expected to face Charles Oliveira for the lightweight title for his next appearance in the UFC octagon.

Diaz recently lost to UFC welterweight contender Leon Edwards at UFC 263. Despite a late flurry that nearly gave him the win, Diaz was on the wrong side of a lopsided judge’s decision.

Poirier was supposed to fight Diaz at UFC 230 but suffered a hip injury that forced him out of the bout that was never rebooked.

The Lafayette Lousiana native clearly still has an interest in squaring off against Diaz and took to social media on Wednesday to subtly call out his old rival.

“Let’s fight don’t be scared this time though,” Diaz replied.

On Thursday, Diaz took to social media to provide an update on a potential fight between him and Poirier – it wasn’t good news.

“I knew you was a pussy bitch that’s 2-0,” Diaz wrote. “Boss the fuck up quit being a lil bitch I do what I want You do what your told”

Poirier then suggested that UFC have lied to Diaz about the status of their potential fight.

McGregor, who has issues with both men, was sitting back like most MMA fans enjoying the social media beef between Poirier and Diaz.

Do you think we’ll see Dustin Poirier vs. Nate Diaz next?