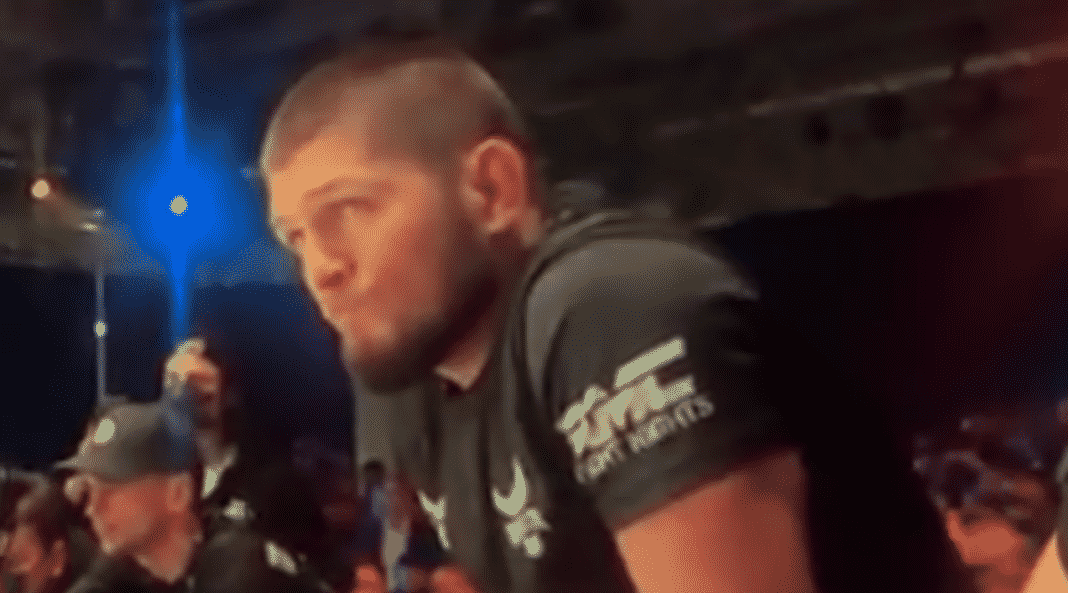 Former UFC lightweight champion, Khabib Nurmagomedov has notably turned his hand to coaching since his decision to walk away from professional mixed martial arts last October, finding success in his new foray. And in the time since, the undefeated Sambo ace has featured prominently in the corners of fighters from San Jose facility, American Kickboxing Academy alongside former head coach, Javier Mendez.

Boasting an impressive winning record from fights cornered in both the UFC and Bellator MMA — Khabib watched on helplessly as longtime friend, former M-1 Global welterweight champion, Shamil Zavurov suffered a knockout defeat in Moscow, Russia over the course of the weekend.

Featuring at an EFC/AFC Abdulmanap Nurmagomedov in Memory billed event, in which the promotion hosted a memorial event following the passing of Khabib’s father, Abdulmanap last year amid a brief battle with COVID-19, Zavurov dropped a late first round knockout loss to Nariman Abbasov.

37-year-old, Zavurov, a 10-year elder of Abbasov, made his final professional walk at the event, and from the onset, struggled with the striking of Abbasov, before he was dropped and finished with subsequent strikes on the ground — drawing some notable anxious reactions from the former UFC lightweight champion.

Commenting on Zavurov’s ability prior to his defeat against Abbasov, Khabib complimented the Kirovaul native’s ability to continue wrestling.

“Shamil (Zavurov) himself doesn’t go easy on anyone,” Khabib said. “When you wrestle him, he never stops, he will keep pushing you. So if you train with Shamil, you have to be fully ready… I know myself from personal experience. We go all out, you can’t have an easy wrestling session with him… When you wrestle with Shamil, it’s never easy. But I’m a bit heavier now and he is cutting weight, so I’ve been avoiding wrestling with him to prevent injuries. The guys who weigh less wrestle him.” (H/T Sportskeeda)