LowKickMMA.com
Home UFC News Diego Sanchez Has Been Cut By The UFC 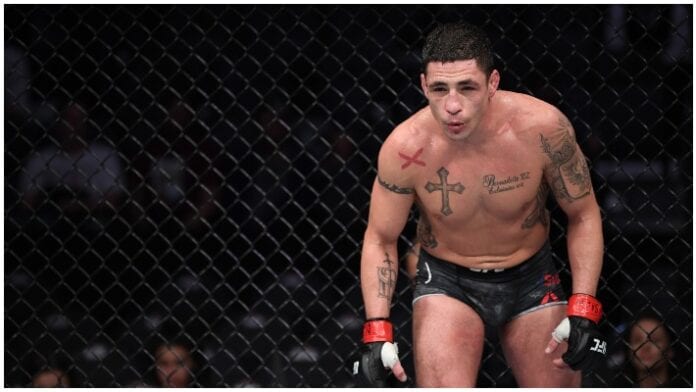 Diego Sanchez has been cut by the UFC.

The Ultimate Fight Season One winner was scheduled to fight Donald Cerrone on May 8 but that fight was recently scrapped for reasons that until now had been unclear.

Last night, Sanchez posted to social media indicating that he is no longer with the UFC.

‘The Nightmare’ called on several other high-profile organisations to snap him up.

The 39-year-old also posted videos that show his coach, Joshua Fabia, hijacking a fighter meeting and lecturing the UFC staff about the media’s mistreatment of Sanchez.

Ahead of his bout with Cerrone, Sanchez had passed the mandatory medical tests.

The promotion was not willing to let Sanchez fight despite these results as Fabia and attorney Charles N. Lakins refused to clarify if the UFC legend was suffering from either short-term or long-term medical issues.

According to Yahoo Sports, Fabia asked a UFC medical coordinator for all of Sanchez’s medical records, dating back to 2004.

Several UFC employees complained to the UFC’s Chief of Business Officer, Hunter Campbell, after being berated by Fabia.

The UFC Chief of Business was concerned about these comments and wrote to Sanchez to verify he is OK to fight on May 8.

Campbell later received a response from Lankins who said Sanchez cannot respond because he’s not a neurologist and hadn’t seen one.

After receiving that response the UFC formally cut Diego Sanchez on April 27.

‘The Nightmare’ finishes his UFC run with a record of 20 wins with 13 defeats.

Sanchez was inducted into the UFC Hall of Fame in 2019.

Do you think the UFC did the right thing by cutting Diego Sanchez?