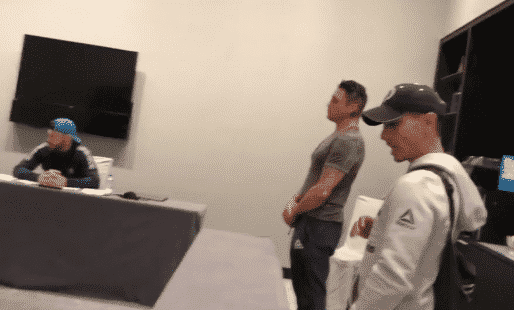 We got an up-close glimpse at what a fighter meeting looked like thanks to Diego Sanchez.

Before his unanimous decision defeat to Jake Matthews at UFC 253 back in September, Sanchez took part in a fighter meeting with the broadcast team as most fighters do.

However, just as his meeting ended, Sanchez’s controversial head coach Joshua Fabia stepped in to have a few words with the likes of Paul Felder, Megan Olivi, Jon Anik, Angela Hill and others.

With Stephan Bonnar recording, Fabia take issue with the commentators for biased commentary towards Sanchez before making things about himself.

“Real quick, guys, ’cause you don’t know who the hell I am,” Fabia said (via MMA Junkie). “You guys have heard a lot of sh*t talk and all the good stuff. Let’s just cut the bullsh*t on the commentating and the low blows on this guy – no trying to turn the narrative that he’s f**king up his legacy and all that weird stuff. Let’s just keep it fair.

“You want some video? Contact me and I’ll send it to you. You want to know what’s going on? You want to actually talk to the people doing it? You might have to actually f**king talk to me. And coming at (Stephan Bonnar) like he’s going to know all this sh*t? He ain’t. He hasn’t been there the whole time. So if anybody needs to actually get those answers, you will have to speak to me.

“And to do that, probably allowing the media to turn the narrative on the guy that’s trying to help people here – and when you respect these two legends, it seems a little disrespectful that you don’t recognize they respect me. And if you’re going to be the one telling the narrative, that’s on you when I’m getting sh*t on by the public, by millions of people. If you’re going to be here leveraging off of all this, notice I’m on the end of the sh*tty stick here, and none of you have stood up for anybody that needed to be stood up for. And that’s real. You guys are like the tough guys, and all this stuff …”

That led to this response from Felder.

There’s much more which is well worth the watch below: