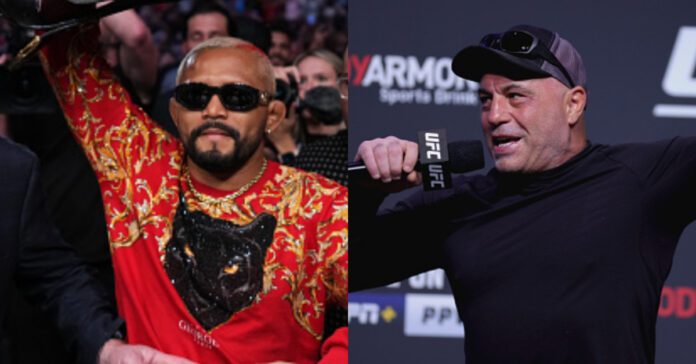 Deiveson Figueiredo responded to Joe Rogan’s comments during UFC 277 that the interim flyweight title fight between Brandon Moreno and Kai Kara-France was “the real title fight.”

Following their closely contested trilogy of bouts, Figueiredo and Moreno were expected to meet for a fourth straight time to bring a close to their rivalry. Unfortunately, a hand injury put Figueiredo on the shelf, prompting the UFC to book an interim title fight between the top two ranked contenders in the division.

Ahead of the evening’s co-main event, Joe Rogan suggested that the interim title fight was the actual title fight and elaborated on those comments while speaking to fellow commentators John Anik and Daniel Cormier.

“I don’t think we’re ever going to see Deiveson Figueiredo down at 125 again, and I think those two gentlemen, there’s a real good argument that Moreno won that last fight as well,” said Rogan. “So that is, in my opinion, that’s the world title fight right there.”

Deiveson Figueiredo was in attendance at American Airlines Arena for Saturday’s card and addressed Rogan’s comments with reporters backstage following the event.

Following his loss to Moreno and UFC 263, Figueiredo discussed the difficulties with making the 125-pound weight limit and suggested a possible move to bantamweight in the future which is what likely prompted Rogan’s comments, but it’s clear the reigning world champion has no intentions of moving on before settling things with Moreno.

Deiveson Figueiredo and Brandon Moreno Are Destined to Dance Again

While Deiveson Figueiredo’s hand injury threw a kink in the UFC’s plans to book a fourth straight showdown between Figueiredo and Moreno, it’s clear that the two are destined to meet once again. Following Moreno’s spectacular third-round knockout of Kara-France at UFC 277 to capture UFC gold once again, the two champions met in the Octagon for a face-off ahead of their inevitable quadrilogy bout.

Their first outing at UFC 256 went to a majority draw prompting an immediate rematch. Six months later, ‘The Assassin Baby’ would win his first world championship, defeating ‘Deus da Guerra’ via third-round submission. The pair would meet once again at UFC 270 with Figueiredo scoring a unanimous decision victory to recapture the flyweight title.

With the trilogy at 1-1-1, a fourth bout was all but guaranteed to happen. Figueiredo is slated to return in late 2022 from a hand injury and requested that the fight go down in his home country of Brazil.