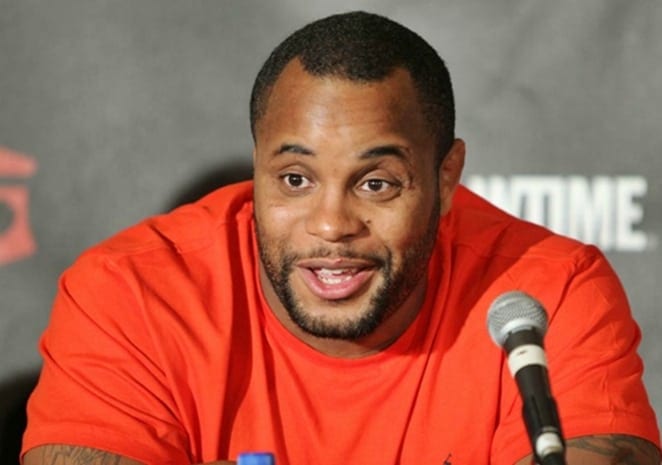 UFC light-heavyweight champion Daniel Cormier started 2015 with a hard loss to the champ of the time Jon Jones. Following a bitter and highly publicized feud between the two, ‘Bones’ eventually got the last laugh with a UFC 182 decision win over ‘DC’. Heartbroken, but not deterred, Cormier came back with a title win over Anthony Johnson at UFC 187, after Jones was stripped of the title by the promotion. Now eye-balling a likely UFC 192 bout with Alexander Gustafsson, Cormier is currently undergoing stem cell therapy for an ongoing knee injury.

Talking to Brazilian sports site Combate, the UFC light-heavyweight boss gives a graphic insight to his treatment, and teases with the possible October 3rd UFC 192 return:

“I’ll fight Alexander with the torn ligament , as I did with the 17 I’ve faced so far. But did the treatment 10 days ago. For two sessions , and it’s horrible . Really hurts. They take a huge needle, put it in my hip and force it to reach the bone, to take stem cells . Then they inject another needle in my knee. I have a video that you’ll never see because I look like a little girl (laughs ) , where every shot I take I cry . It is very sore. I can not train for the next two weeks. Probably back to training in July to start the camp in August and fight on October 3 against Alexander .”

When quizzed as to whether UFC 192 on October 3rd was an official date for his bout with the Swede, Cormier said the following:

“I don’t know if we will fight on October 3 yet. I’m just trying to force it. I try to use the media to get the things I want. People sometimes get angry with me, but I only ask things . I asked to fight on October 3 . Sometimes many things happen just because you ask . People already think it’s official , but it is not . I want to try to fight that day , it will be in Houston and I want Cain (Velasquez) to also fight at the event. Also I wanted Khabib (Nurmagomedov) on the same day to do an AKA world event.”

Also suffering a knee injury that has seen him sidelined since April 2014, ‘The Eagle’ has been bumped from two huge PPV (pay-per-view) cards over the last year. His most recent win was a lightweight decision victory over current champion Rafael Dos Anjos. Nurmagomedov and DC also train with Cain Velasquez at AKA (American Kickboxing Academy) in San Jose, California, so it would be great to see all three fit and well and competing on the same card. On to Gus, and Cormier makes a bold statement:

“It’s difficult. It presents many challenges yet to see . Different challenges to even Jon Jones . I think he’s technically better than Jones . Jones is very technical , but it is so versatile that you can not decipher it . With Gustafsson , you know that you face a high-level boxer but he’s so good at it that it is difficult to prepare. But I am confident. I know I’m good with wrestling and I will not run away from it . I will put him in situations to which he is not accustomed . He does not have a wrestling life and his body will start to get tired , the legs will not move as well after the first round. I will pressure him, not give him any space. This fight will not be pretty. For me to win I have to make this a dirty fight, and not let Alexander Gustafsson make it a technical striking battle”

Jones’ diverse striking skills saw him defeat some of the best fighters in the game, quite often with devastating dominance. Elbows, knees, spinning and jumping attacks were all part of the ex-champion’s A-game, but he very nearly met his match in the form of ‘The Mauler’ at UFC 165. Gus bashed up Jones in the stand up more than any opponent had ever before, and won the fight in the eyes of many fans. Cormier is a different kind of beast though, albeit handled by Jones on the most part, many fans believe his style fits perfectly with Gustafsson’s.

By the sounds of it, the newly crowned 205-pound kingpin is prepared to make it a very ugly fight with Gus, but it’s not like ‘The Mauler’ is any stranger to those kind of fights. That said, DC isn’t the kind of guy you can beat of your back.

We’ll keep you updated to the champion’s status, and any news on his booking with Alex in the coming weeks, so stay tuned to LowKickMMA!