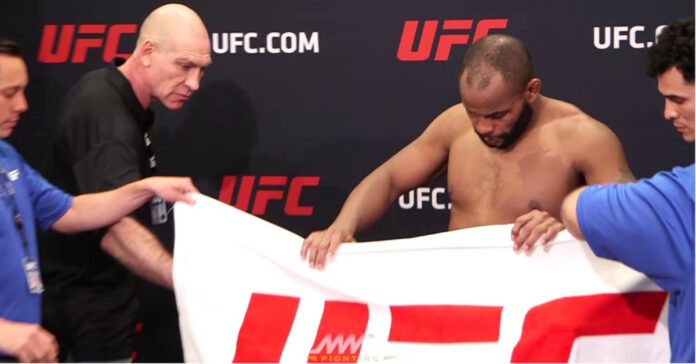 Former UFC two-division champion Daniel Cormier has finally admitted to an incident in 2017 that came to be known as ‘towelgate’.

At UFC 210, ‘DC’ was scheduled to face Anthony ‘Rumble’ Johnson in a rematch of their UFC 187 bout where Cormier scored a third-round submission to capture the light heavyweight championship.

When Cormier initially stepped on the scale for the scheduled bout, he weighed in over the light heavyweight limit. Cormier returned to the scale shortly after and successfully weighed in on his second attempt. During the second attempt, it appeared that Cormier grabbed the towel being held up in front of him, aiding in meeting the weight requirement.

“I want to tell you something because I feel like right now is the time to be completely transparent. I think I may have grabbed the towel in Buffalo. Rumble, I’m sorry my guy.”

The incident received some renewed attention following Charles Oliveira’s botched weigh-in that resulted in the former lightweight champion being stripped of his title ahead of a showdown with Justin Gaethje at UFC 274.

Lightweight fan-favorite Tony Ferguson called out Cormier following UFC 274, reminding fans of the incident and stating that Cormier should have been stripped of his title, similar to how ‘Do Bronx’ was stripped of his.

“How Not to Make Weight Ladies & Gentlemen. Shoulda Stripped Em’ Like They Did @CharlesDoBronx Shout Out To All Those Doin’ It Right & Keepin’ The Sport Clean – Champ -CSO- CuttingWeight Feeling Great,” Ferguson wrote.

“Tony please stop. Go and sit back for a little, tuck your head in a hole somewhere. Regroup man, recover spend some time with your family. Like just please stop! I plead with you. It is not a good look. Like you’re making me sad,” Cormier responded.

In his response, Cormier didn’t outright deny the accusations. Now we know why.