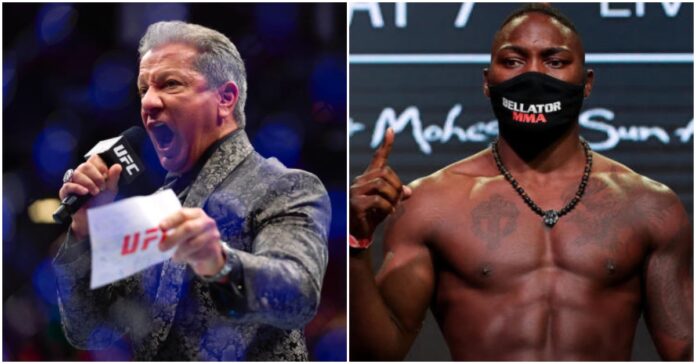 Anthony Johnson (23-6 MMA) has taken to social media to respond to some of Bruce Buffer’s recent comments on his podcast series ‘IT’S TIME!!!‘.

The long-time UFC announcer took a chance to try and convince current UFC Heavyweight Champion, Francis Ngannou to stay with the promotion, amid of the fighters’ current contract dispute.

“No offense to other organizations, but you become irrelevant when you leave the UFC after a while. Instead of losing in the UFC your contract is being ended in the UFC, and you fall from the Octagon down into Bellator [etc]. Let’s just hope everybody gets together [to sort out a deal].”

Buffer, like many of us, is a fan of the sport and doesn’t want to see Ngannou vacate what he has now with the UFC.

How did Bellator’s Light heavyweight contender, Anthony Johnson take to these comments?

Nonetheless, ‘Rumble’ Johnson wasn’t happy to hear Bellator being used as an example of post-UFC irrelevancy.

“Bruce needs to stay off the crack,” Johnson said. “How’s anything irrelevant when providing food and shelter for family? Oh, by the way, I got paid more for moving to another organisation.”

“Bruce has his guaranteed money so he can talk. fighters have to wait and actually entertain people when they get the chance to make some money.” (‘Transcribed by Middleeasy‘)

The former 2x UFC title challenger came out of retirement in 2021 and instead of jumping back into the octagon, Johnson decided to sign a multi-year deal with Bellator instead.

The American has fought only once since joining Bellator, where he beat José Augusto (7-3 MMA) in the second round via Knockout.

It is still unsure when we will see Anthony Johnson back in action as he is still not cleared to fight, with the same issue which forced him out of a title shot in October last year, according to Scott Coker.

Do you fighters become “irrelevant” when they leave the UFC?