LowKickMMA.com
Home UFC News Daniel Cormier Reveals What Really Happened Between Him And Phil Hawes During... 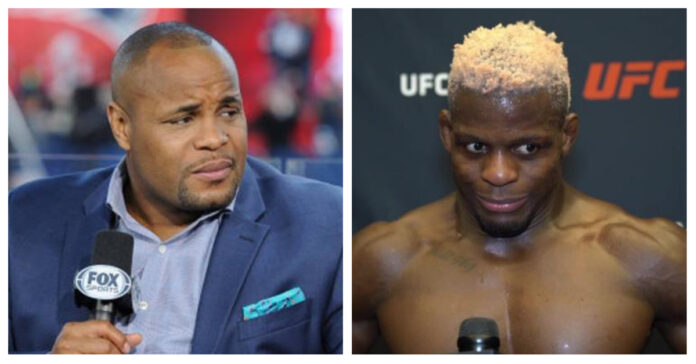 Daniel Cormier (22-3 MMA) has recently spoken out about his version of events after the incident that occurred between him and current UFC fighter Phil Hawes (12-3 MMA) following his TKO win at UFC Austin the past weekend.

The bout saw Hawes get himself back into the win column after taking out one of Cormier’s fellow teammates from the ‘American Kickboxing Academy’, Deron Winn (10-3 MMA) in spectacular style. However, the 33-year-old didn’t stop his talking there.

As Daniel Cormier began to enter the octagon to conduct the post-fight interview, the UFC Hall-of-Famer was shocked as he was bombarded with insults from Hawes.

“You picked the wrong pony… Yeah you… You know what I’m talking about.” Hawes exclaimed to ‘DC’.

Before the interview began, the pair continued to share their heated exchange, with Phil Hawes feeling disrespected as he believed that the 43-year-old was actively rooting against him.

Although, Cormier was able to keep his cool against the adrenaline-filled fighter, after speaking on ‘Daniel Cormier TV’, the former two-division UFC champion was able to explain his side of the story.

“Fight ends, I get up to go do the interview,” Cormier said. “I walk towards the ring, and I can hear, ‘Where’s DC? Where’s DC?’ while I was walking into the octagon.”

“So I’m like, ‘Me?’ to Phil. And Phil’s kind of telling me that I picked the wrong opponent. I’ll tell you exactly what it stems from.”

Daniel Cormier continued to explain that he initially wasn’t a fan of the matchup between his teammate Winn taking on ‘No Hype’, preferring Deron Winn to go and seek out a different-styled opponent.

“When I was in Abu Dhabi … we talked about Phil coming out to AKA to train with me. What happened next was the UFC called and asked for Deron Winn to fight Phil Hawes.”

“I said ‘no’ to the fight,” Cormier continued. “I didn’t think it was a great fight. And, obviously, look at what played out.”

“So, it’s not like I was wrong in my thought in regards to the matchup. So Phil is saying I picked the wrong opponent. So I say to Phil, ‘Do you think I pick fights?'” (Transcribed by MiddleEASY.com)

Despite, dodging what could have been a really bad PR moment for the UFC, the situation between the two swiftly died down as Hawes realized his mistake and was quick to apologize to Cormier before their post-fight interview even began.

Daniel Cormier ended his show off by expressing his respect for Phil Hawes as a person and a fighter, nevertheless, he hopes the fighter can learn from their quarrel helping him become a more cool-headed athlete in the future.

What do you make of the situation that occurred between Daniel Cormier and Phil Hawes?