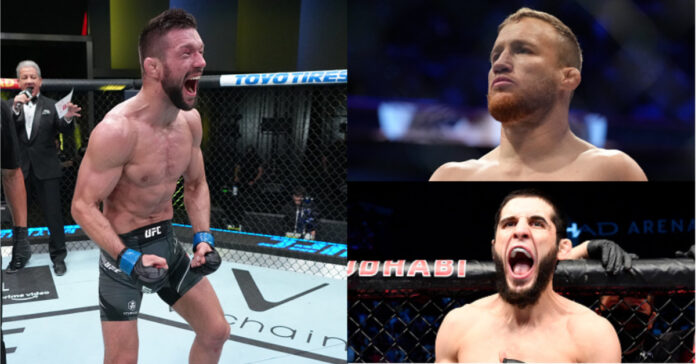 Mateusz Gamrot surprised many with his big win over Arman Tsarukyan at UFC Vegas 57 on Saturday.

Tsarukyan entered the bout as a -280 favorite over the Polish grappler, but it was Gamrot’s conditioning that held up better allowing him to take the last three rounds on all three scorecards to secure a unanimous decision victory. Following his victory, Gamrot took the opportunity to shoot his shot, calling out former two-time UFC title challenger Justin Gaethje.

Appearing at the UFC Vegas 57 post-fight press conference, Gamrot elaborated on his callout of ‘The Highlight’ calling it a battle of the old school versus the new school of lightweight contenders.

“I am a big fan of Justin Gaethje. You know, I have a lot of respect for him. I think he’s the most brutal guy in the lightweight division. This guy fighting two times in the title shot and I think this is old school and I am new school. I am new generation. Now I wanna switch the place. I start climbing to the top.”

Mateusz Gamrot also discussed a conversation he had with former lightweight champion and soon-to-be UFC Hall of Famer Khabib Nurmagomedov.

“Khabib said, ‘congratulations on your fight, you are a nice guy, for sure in the future you meet with Islam in fight.’ So I keep my fingers crossed for Islam. I think Islam beats Charles Oliveira next fight and I want my next fight with Justin and next fighting with Islam. Simple plan.”

With his win over Tsarukyan, Gamrot will likely find himself a top ten opponent for his next bout. Gaethje last fought at UFC 274 in May. Only a month removed from that fight, the timeline would certainly make sense for Gamrot to get a shot at Gaethje’s No. 3 spot in the rankings.