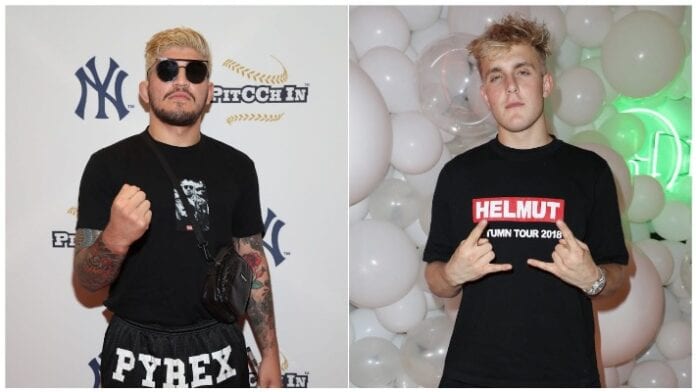 Jake Paul who is now 2-0 as a professional boxer has been extremely outspoken about his boxing ability. Proceeding to callout numerous MMA stars such as Conor McGregor, Ben Askren, and of course Dillon Danis. The undefeated Bellator star has responded to Paul’s latest callout via Twitter telling him to “be careful what he wishes for.” Adding to a long list of back and forth comments between the two.

But UFC commentator Daniel Cormier has voiced his opinion on what would happen if we were to see Paul vs Danis in the boxing ring. While discussing Jake Paul’s recent victory over Nate Robinson on the DC and Helwani podcast, Cormier stated that he believed Jake Paul would beat Dillon Danis in the boxing ring. However, Danis was not happy with DC’s comments. Taking to Twitter and posting a picture captioned with “watch that fat mouth before I shut it.”

DC responded simply saying “Danis sit your ass down before I call Jake Paul for you!!!” Reminding the Bellator fighter that he believes Paul would defeat him

Dillon Danis has not competed since his submission victory over Max Humphrey. A bout that took place over a year ago in June of 2019. Injuries have kept Danis sidelined. However, could we see the known grappler face Paul on his return? Of course, in boxing as an MMA bout would likely see Danis submit Paul.

It is difficult to know if either Jake Paul or Dillon Danis are serious about facing each other. As the two are known for being very outspoken for the purpose of bringing attention towards them. However, if the pair are eager to meet inside the ring, why not make the fight? In a lot of peoples eyes they do not see Jake Paul as a professional boxer, with his two wins coming against low level competition. And Dillon Danis has been slated in the past for not improving his boxing skills and relying on his high level jiu-jitsu. The pair have an opportunity to silence the doubters, as well as make a large sum of money. With both individuals well known to the public.

Do you think Paul vs Danis will be made and if so who would be victorious?