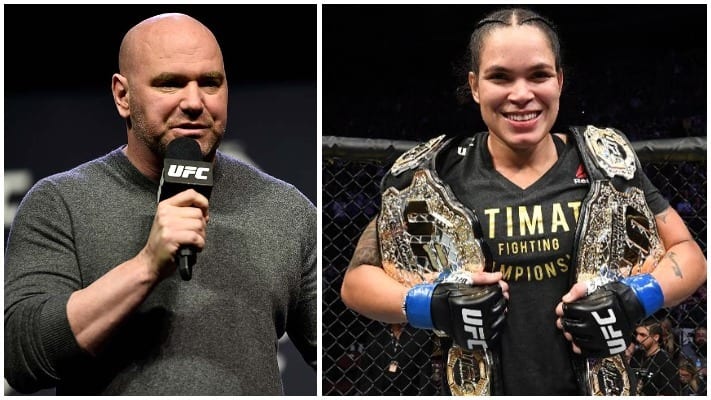 Paul transitioned to boxing in 2020 and has looked impressive against poor opposition. In November he stretched his professional record to 2-0 by knocking out former NBA player Nate Robinson on the undercard of Mike Tyson vs. Roy Jones Jr.

Post-fight the internet celebrity issued a call out to Conor McGregor and his SBG teammate Dillon Danis. Paul has since been trolling pretty much every high-profile MMA fighter in or around his weight class but is yet to find an opponent for his next fight.

Meanwhile, his older brother Logan Paul has secured perhaps the biggest fight available. Despite having next to no boxing experience he will square off against Floyd Mayweather in an exhibition bout on February 20.

White gave a fiery response when asked about the Paul Brothers on a recent episode of the SHOUT! Buffalo podcast, he said.

“The answer to that question is, who gives a (expletive)? Neither one of those guys can fight. It’s all a big gimmick. Like I said in a (recent) press conference, there’s a market for that. If people are dumb enough to spend their money watching that (expletive), I don’t know what to tell you. Good luck to them. I (couldn’t) care less what that guy (does). I get it. He’s trying to make some money and is doing his thing. There are people who want to spend money on that. I’m not that guy.”

White previously threatened to set his female double-champ on the younger Paul brother who shied away from the fight claiming “no-one knows” who Amanda Nunes is. The UFC boss praised Paul for making the right decision by avoiding a fight with the Brazilian knockout artist who would do serious damage to him in the ring.

“Amanda Nunes will knock that kid out,” White said. “To even think about that guy fighting, he’s like, ‘I’m never going to fight a woman.’ You shouldn’t. You shouldn’t because she’ll put you in a coma. That guy is just some kid off the street. One of the big problems with him right now, he’s lucky there’s a pandemic. He’s talking smack about real people – real people that he could run into at a restaurant some night and things like that. This isn’t a real guy. This is just some kid on YouTube.” (Transcribed by MMA Junkie)

Do you agree with Dana White? Would Amanda Nunes put Jake Paul in a coma if they fought?