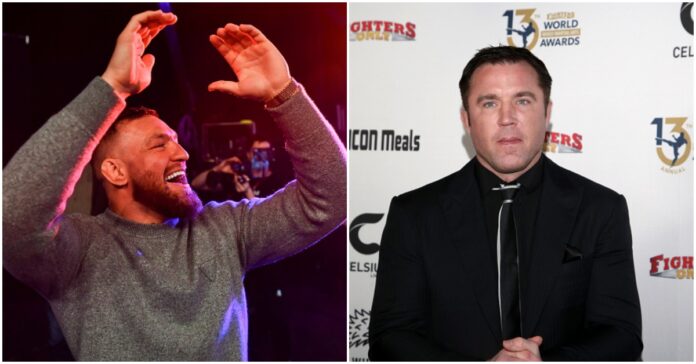 The one and only Conor Mcgregor is inching closer and closer to making yet another blockbuster return, and the beloved Chael Sonnen has chimed in with his thoughts on who Mcgregor should face for his comeback fight.

“Michael Chiesa. That’s the one that has absolutely never been discussed by anybody,” Sonnen said on YouTube (transcribed by The Mirror).

“But just to remind you guys. When the bus incident between Conor and the dolly and Khabib took place (back in 2018), there was lawsuits that followed that. And Chiesa was one of them. Chiesa got glass into his eye, it was very bad experience. I think that there’s a story there.” Sonnen continued.

“I’ve always thought there was a story there that should be told. But neither guy has told it. Neither guy’s manager told it, neither camp has told it, no trainers have told it. But that’s the match. That’s a very interesting match from a stylistic standpoint. That checks a lot of boxes.”

Who Will Conor Mcgregor Face for his UFC Return?

‘The Notorious’ has been posting pictures, and lately, his physique looks utterly ridiculous. He’s sculpted to the max, and he looks ready to go. However, nobody is really certain who he’s fighting upon his return.

Conor Mcgregor wants a welterweight title shot against Kamaru Usman, who’s allegedly accepted the challenge, but it’s not set in stone the UFC wants to go that route. Also, there’s always the Nate Diaz trilogy fight to consider. However, ‘Mr. 209’ has stated recently he doesn’t want to fight Mcgregor because “He sucks.”

Mcgregor is 1-4 in his last five fights, with his most recent bout against Dustin Poirier ending with a freak injury. For a while ‘The Notorious’ seemed like he wanted a fourth fight with Poirier, but recently its been nothing but gold the Irishman has had his eyes on.

What weight class would you like to see Conor Mcgregor return to, and against what opponent?