LowKickMMA.com
Home MMA News Conor McGregor To Jose Aldo: I Love You Like My B**** 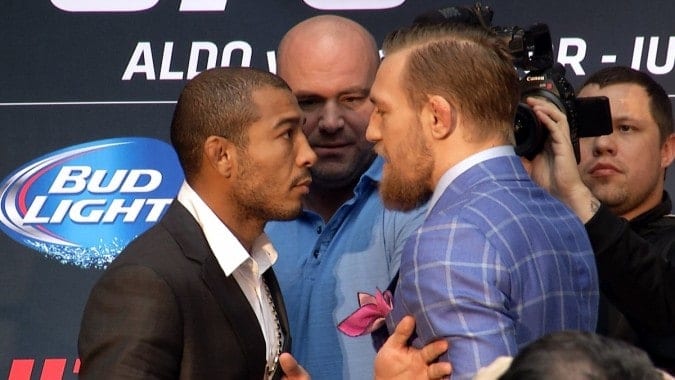 Conor McGregor may have been on his best game ever (and that’s saying a lot) at today’s (Fri., September 4, 2015) UFC ‘Go Big’ campaign launch for the absolutely blockbuster slates of events the UFC has planned for the rest of the year.

Not surprisingly, ‘Notorious’ opened things up with his prognostication for the featherweight division by the end of 2015 when he was asked about his prediction for 2016:

“2016, well, the end of 2015 means the end of the featherweight division, they are all dead in the water it’s done, IF the Brazilian shows up; I hope he does. Who knows? He’s petrified, he’s the so-called pound-for-pound, but he’s quakin’ in his boots over there. You know what I mean? I don’t know, I hope he shows up, but if he shows up December 12, the division will be killed, like I predicted, and then it’s on to the 255 ‘stuck in the mud’ division.”

Aldo then told Ariel Helwani that McGregor didn’t get to him, and that he would simply beat him in the fight:

“No. I think it’s funny; I love laughing. When it comes time to fight, I’m going to beat him, so it doesn’t bother me at all.”

The longtime champ was undeterred, noting that his replacement Chad Mendes was having his way with the Irishman before gassing and getting finished as the second round ended:

“Chad was kicking his ass. Has he heard about jiu-jitsu? Does he know what wrestling is? Chad took that fight on two weeks’ notice, and he looked like a turtle. He made me laugh.”

McGregor responded with some brutal barbs, adding that he thought Aldo was permanently damaged by his second match with Mendes at 2014’s UFC 179:

“At the end of it, he was the turtle. When you fought Chad, he rearranged your face. You haven’t looked right since. After that five round Mendes fight, which arguably could have went to him, you look like you’ve had a stroke. The left side of your face is drooping. I’m worried about you, honestly, I’m worried. I love you, I love you like my bitch. I just wanna make sure you’re okay. Get yourself medically tested because your face is drooping to the left.”

“You know, this guy came in and tried to shake my hand. Is it or isn’t it? He talking about dressing well; he’s got his pants all torn up. You know, who is he?

The archenemies were then prompted to engage in a staredown because Aldo had to catch a plane back to Brazil to be the best man in a wedding, for which McGregor blasted him as expected:

“Jose has to catch a plane. What? How the fuck am I supposed to get excited about this thing and he’s gone? He doesn’t wanna be here, he’s not gonna be there December 12 like he wasn’t there July 11, so I’ll tell everyone up here from 145 right through to 170, ‘Prepare for this fight, because I don’t think he’s showing up. It’s the opportunity of a lifetime you have, so get ready and don’t use Chad’s excuse of camps and all this bullshit. Stay ready ‘cause he’s gone runnin’.’”

When they did finally square off things, got heated as expected, setting the stage for one of MMA’s most anticipated bouts. Check it out courtesy of the UFC:

Jose Aldo and Conor McGregor face off ahead of UFC 194 and it got heated!! Tickets on sale next week!!

But unfortunately, the MMA world will wait with baited breath until it actually happens after fans got burned this summer.