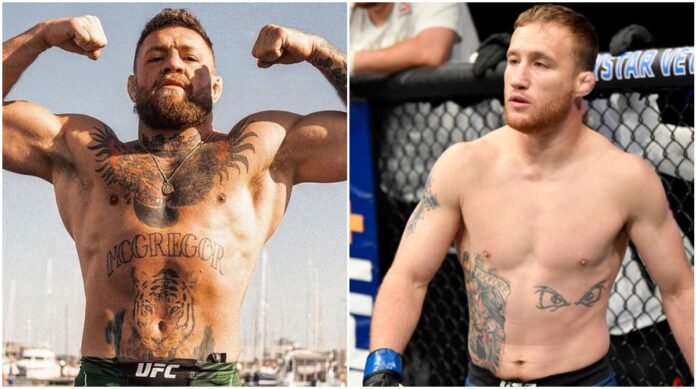 Oliveira’s toughness should never be questioned ever again. He has made amazing comebacks in all his championship fights and even came back from multiple knockdowns the other night at UFC 274 against Justin Gaethje. Gaethje had Oliveira right where he wanted him, but refused to go on the ground with him. Oliveira ended up submitting Gaethje after being in a few early predicaments.

Coming into the fight, Gaethje had called Oliveira a quitter and questioned his heart. Even after his miraculous comeback against Michael Chandler and Dustin Poirier, Gaethje still questioned his toughness publicly.

“I was saying that in the times that he’s lost, he didn’t even get knocked out, he quit sometimes. The choice to quit is something one makes, and once you make it, you can make it again, because you know that it’s there.” Gaethje had previously said about Oliveira’s toughness.

“This absolute clown! The aul pretend to be asleep after he tapped as well lol. Jackass” McGregor tweeted out.

McGregor hasn’t fought since he broken his leg fighting Poirier for the third time. There have been rumbles of who McGregor may fight when he comes back and a fight with Gaethje could be in the future. Gaethje and McGregor would be a fantastic matchup for both fighters. Gaethje has some of the best power in the division, but he isn’t ver technical. McGregor makes his money fighting against guys that strike wildly, as he is one of the games best counter strikers.

Although cutting down to 155 may not be in McGregor’s future. He has said multiple times that he has wanted to fight more at 170 than anywhere else. He has been putting on a lot of muscle since his leg injury.

Would you like to see McGregor take on Gaethje?