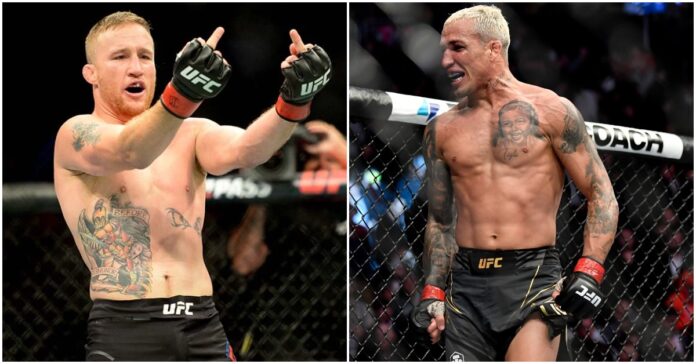 UFC lightweight Justin Gaethje has stated he believes Charles Oliveira will ‘quit’ against him at UFC 274’s main event.

This weekend, Gaethje is set to have his second attempt at UFC gold as he challenges Olivieria for the 155lb title in what will be Oliveira’s second title defense.

Gaethje’s confidence has been evident throughout the build-up to the bout and the American’s intensity has been growing along with it. Pledges to ‘put a hole’ in Oliveira’s face have been put in place by ‘The Highlight’ but when talking to ESPN, Gaethje would go as far as saying that Oliveira would quit.

“I wasn’t being overly critical, I wasn’t saying he was a bad champion,” Gatehje said. “I was saying that in the times that he’s lost, he didn’t even get knocked out, he quit sometimes. The choice to quit is something one makes, and once you make it, you can make it again, because you know that it’s there.

“I don’t believe I’ve ever made that choice,” Gaethje continued. “Some people haven’t and I believe some people have. believe that he has, and that’s all I was saying. I believe, deep down, he knows his way out, and that’s to quit whenever he gets hit too many times too hard.

“But, again, deep down, once it happened once it will happen again, and I’m the perfect guy to show it to him.”

UFC 274’s main event has the potential to be a lightweight classic, with both men showing in their recent performances, which were some of the most entertaining of the year.

The champion, Oliveira, is coming off two back-to-back finishes over Michael Chandler and Dustin Poirier. In both fights, the Brazilian has had to make movie-like comebacks to finish some of the best the 155lb division has had to offer.

You must look no further than Gaethje’s nickname of ‘The Highlight’ to understand just how exciting he can be. Owner of slam finishes, one-punch knockouts, and 10 performance bonuses, Gaethje is guaranteed entertainment. He has produced some UFC classics in his time, his most recent against Chandler being arguable the best three-round fight ever.

What do you think, could Justin Gaethje make Charles Oliveira quit?