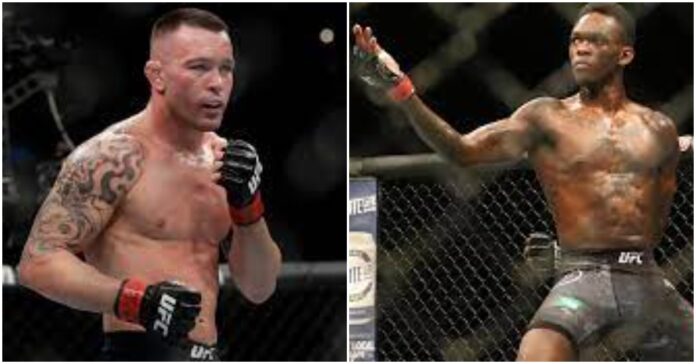 Chael Sonnen gives his reasoning as to why Colby Covington should be Israel Adesanya’s next opponent.

“You cannot be a No. 1 contender and not get a title shot. It’s not right. I want to see Colby Covington fighting Israel Adesanya,” Sonnen said on his YouTube channel. “Quite frankly, Izzy Adesanya needs somebody that’s going to meet him halfway. I think that Adesanya is also a master. I think he’s a master entertainer on the way to the ring. What he does and before he leaves the microphone behind. He needs somebody that can match him. Robert Whittaker left him hanging, didn’t want to meet him halfway. Cannonier is not going to meet him halfway. (Adesanya and Covington) need each other right now. They can form a partnership, and they can go do some business.(via bjpenn.com)

Covington, who is 0-2 against Welterweight Champion, Kamaru Usman, doesn’t look like he will be getting another title shot anytime soon and teased the idea of moving weight divisions in his post-fight interview with Joe Rogan at UFC 272.

Adesanya has cleared out most of the division and although he is rumored to be fighting Jared Cannonier next, Covington is a big name and could prove to be a real test for Adesanya.

Although Chael Sonnen is convinced this is the fight to make, Dana White appeared to shut the idea down shortly after UFC 272. If Covington is going to get a title shot at a new weight, he will likely need an impressive win or two in the division to prove he can beat the top contenders.

While on paper these two’s fighting styles may not clash for the most exciting matchup, Chael Sonnen believes the two fighters don’t have a lot of options at the moment and could benefit from working with each other in what could turn out to be a very marketable bout.

Do you agree with Chael Sonnen? Should Israel Adesanya vs. Colby Covington be next?