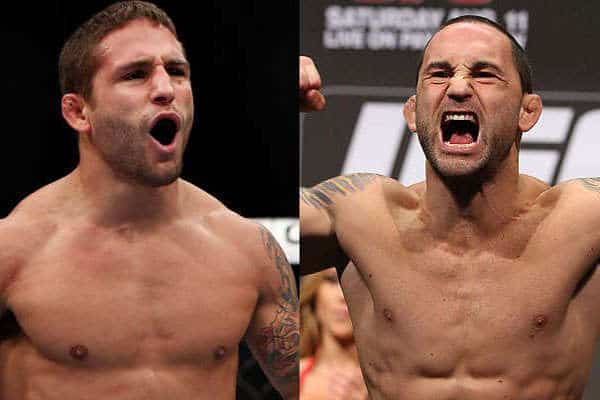 Top five UFC featherweights Frankie Edgar and Chad Mendes will duke it out at The Ultimate Fighter 22 finale this coming December 12, in an attempt to decide the likely next contender to the division’s champion. After UFC 194 the following day, the head of the division will either still be Brazilian juggernaut Jose Aldo, or the current interim boss Conor McGregor. So for Edgar and Mendes, there’s a lot on the line when they collide.

For ‘Money’ it will mean a rematch against Aldo, who beat him twice, or with ‘The Notorious’ who TKO’d the Team Alpha Male wrestler at UFC 189. His performance at the Las Vegas based PPV was met with mixed reactions, but Mendes did take the fight on very short notice. Edgar doesn’t quite see it as neutrally as most though, as he told Jon Anik and Kenny Florian he feels Mendes just wanted a way out. As quoted by MMAFighting.com:

“You know, I think he was looking for a way out,” Edgar told the UFC commentators. “I know it’s tough coming off two weeks notice and supposedly he broke his foot and whatnot but you’ve got to go into every fight trying to win, man. You can’t be fighting for a paycheck. If you’re fighting for a paycheck, I’m the wrong guy to be standing across the cage from.”

Wow, no holding back there, but does he have a point? Even if Chad was ‘broken’ and looking for a way out isn’t that just a bi-product of not being physically prepared enough for such a huge fight? Of course there is the darker side to Edgar’s comments, which Mendes seems to have inferred:

“This is my life. This is what I live for. I’ve built everything around that. I’m not going to go in there looking to find an easy way out. There’s only one way to find that out, Frankie. We’re going to find out Dec. 11. I definitely don’t think this is going to be an easy fight for you.”

As well as this being a great stylistic match up, there’s now some beef to observe between ‘The Answer’ and ‘Money.’ Edgar will hope to get the victory come December to secure either his rematch with Aldo, or a fresh fight with McGregor. So many interesting possibilities lie ahead.

Mendes arguably has the striking edge in this pairing at least in terms of knockout power, but Edgar has very high level technical boxing and movement. Both guys have great wrestling to fall back on, so it will be fun to see how this one plays out.