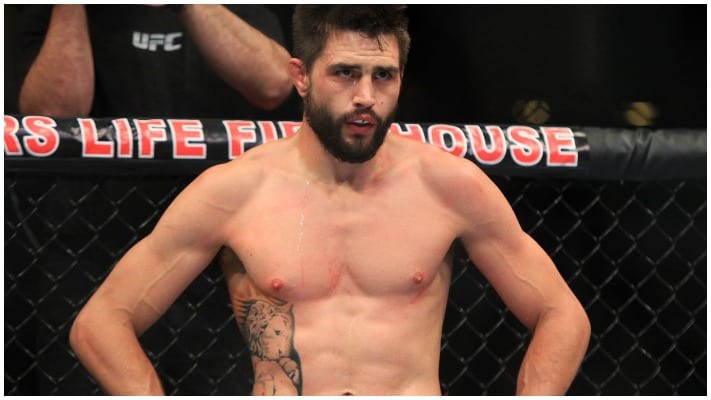 Former welterweight contender Carlos Condit will return to fighting this year according to his coach Mike Winkeljohn.

Condit hasn’t fought since late 2018 and is currently riding a five-fight losing streak. He was due to return to the octagon against Mikey Gall in December, but a detached retina forced him out of the fight which is yet to be re-scheduled.

Speaking to BJ Penn.com his coach Mike Winkeljohn said Condit now has the fire back and fans should expect to see ‘The Natural Born Killer’ in the cage before the end of this year.

“I think you may very well see Carlos Condit fight this year. He’s training and Carlos has that fire. He’s just a fighter and had some bumps in the road behind the scenes that slowed him down a little bit. But, I think you will see Carlos fight before the end of the year.”

The 35-year-old will be looking for big name and big money fights on his return according to the coach. Despite his losing streak, Condit is a fighter who commands a lot of respect in the welterweight division. The former WEC champion holds signature wins over the likes of Nick Diaz, Rory MacDonald, Dan Hardy, and Martin Kampmann. He’ll be looking to add another big name to the list and be rewarded for his efforts, Winkeljohn explained.

“Carlos is all about challenging himself. I haven’t had a conversation with him about it but my guess would be he wants big fights,” he explained. “For him, I want him to get a money fight as I want Carlos Condit to make some big money as he has done so much in the UFC so I’d love for him to get that back. Carlos just wants to fight anybody.”

Who should Carlos Condit fight on his UFC return?