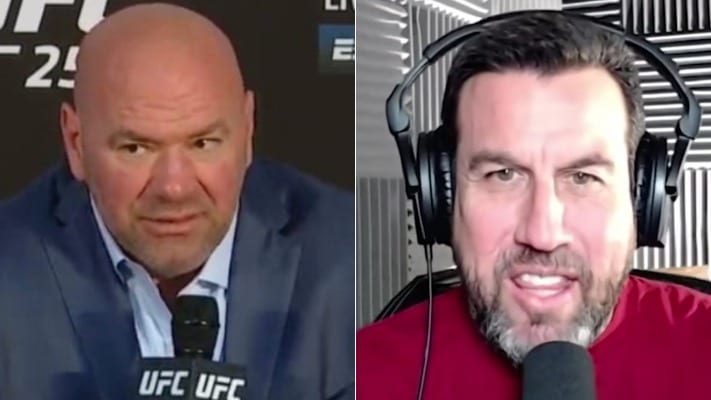 White recently released a video criticizing the media for objecting to the UFC hosting events during the early months of the COVID-19 pandemic and subsequent lockdowns.

Of course, most of the snippets of media members and journalists featured in the video were out of context as they were made before proper protocols were put in place for hosting events.

McCarthy along with “Weighing In” podcast co-host Josh Thomson were featured in the video and the former recently gave his response to White’s video.

“First off, you need to have your own little pat on the back, ‘OK, let me pat you on the back,’ because you took everything out of context and made it to where were you were the hero. Congratulations, Hero Dana. Oh, let me bow down to you. Unbelievable. My god. When are you going to figure (it) out? You know what? Just don’t worry about it. Do your thing you did. You did great. The UFC had a fantastic year. Let’s be honest about everything that occurred, and let’s be honest about your video because your video is clickbait, and it’s (expletive), and it’s out of context. It’s ridiculous.”

UFC 249 was originally set for Brooklyn on April 18 but that went out of the window once New York — along with the rest of the United States — was shut down. White attempted to get around it by booking the event at the Tachi Palace Casino which was on tribal land in Leemore outside the California State Athletic Commission’s jurisdiction.

However, after much media criticism and pressure, White was told by Disney to let go of those plans. In the end, proper protocols were put in place with Jacksonville, Florida, hosting the first of three UFC events including UFC 249.

McCarthy was all in favor of the Jacksonville shows — just not the one in Leemore.

“I was 100 percent supporting (events being held),” McCarthy said. “When he went to Jacksonville, Fla., I was one of his biggest supporters – because he wasn’t doing what he was doing with the Tachi Palace and Lemoore fight that was illegal.”

McCarthy also found humor in the fact that UFC commentator Joe Rogan was not included in the video despite expressing concerns himself.

“It’s kind of funny that all of his little editors and everything with his video, they didn’t put Joe Rogan on there,” McCarthy added. “Do you know why? I wonder why. Let’s see. Oh, because it doesn’t look good. Because Joe Rogan said what? ‘I am not going to do any commentary. I’m not going to do any commentary but it ain’t going to be me.’ Because? He didn’t know what was going on and he was worried about stuff – and that’s OK to be worried about.”

What do you think of McCarthy’s response?