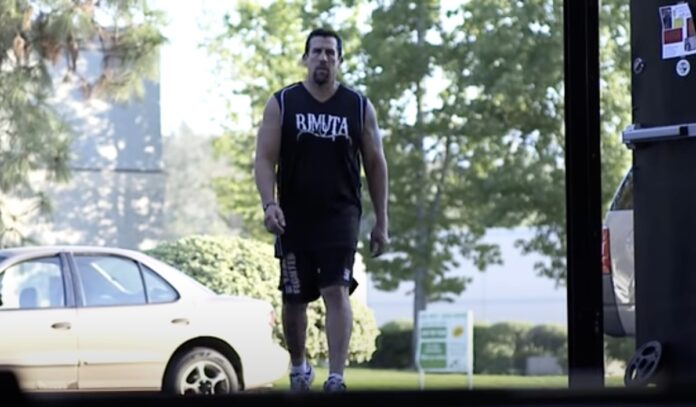 Big John McCarthy is a highly respected legend within the sport of MMA. He has been around since the Ultimate Fighting Championship was created in 1993.

Right in the middle of the cage to watch over the fights and say his patented catch phrase. Let’s get it on!”

This is a bio on one of the most known figures within MMA, Big John McCarthy. We’ll detail everything from Big John’s work as a police officer, training with the Gracie family, and his time as an official.

John McCarthy grew up in the LA area and is the son of Police Officer Ronald McCarthy. When John grew up, he and his brother Ronald Jr would become police officers like their father.

Big John McCarthy joined the LAPD in 1985 and did a number of jobs within the department. He was actually with the LAPD from 1985-2007.

All while officiating MMA events across the world multiple times a month. For two decades, McCarthy’s main job within the department was being the head tactics and self defense instructor.

A job that McCarthy held from August of 1993 until his retirement in 2007.

John began training with Rorion Gracie at the Gracie Academy in Torrance during the early 1990s. Rorion had this program for employees of law enforcement called GRAPLE. (Gracie Resisting Attack Procedures for Law Enforcement)

The reason why McCarthy started training with the Gracie’s was due to the Rodney King riots during the early 1990s. After the riots, the LAPD realized that their officers had no skill of subduing a suspect without using their nightsticks or clubs.

This is how they got in contact with the Gracie’s and officers began learning how to physically hold down suspects. Without the use of their weapons.

At first, McCarthy was skeptical of the power of Jiu Jitsu like most were at the time. Since John is a very large man, he figured he could use his size to beat Jiu Jitsu.

He, like everyone before him, was quickly proven wrong and easily dispatched by a few of the Gracie family members. From that point on, Big John was sold on Jiu Jitsu and would become a life long practitioner.

McCarthy would get his GRAPLE certification in 1993. Which in turn would get him the head self-defense instructor position at the LAPD, which he held for 14 years.

Big John McCarthy wanted to fight in the UFC

Initially when Rorion and Art Davie were putting together the UFC, McCarthy expressed interest in fighting. His instructor Rorion quickly turned John down for a number of reasons.

The main reason being that he wanted a member of the Gracie family to represent Jiu Jitsu at the tournament. Also he felt if they put in a giant of a man like John it would defeat the purpose of showing the power of Jiu Jitsu.

They needed someone that was smaller and unassuming like Royce to compete in the tournament. It turned out that Royce was the correct choice as Jiu Jitsu exploded in popularity. It also laid the groundwork for the UFC to become a sport.

How did John McCarthy get the nickname “Big John?”

McCarthy actually got the nickname from the original co-owner of the UFC, Art Davie. The former owner of the UFC dubbed McCarthy “Big John” after he lifted Davie in the air with both hands.

The nickname stuck and now everyone has been referring to McCarthy as Big John for almost 30 years.

Even though Rorion turned John down for his offer to fight in the UFC, he did have another idea. Rorion thought with his large stature and law enforcement background that he would be a great referee.

Since the early UFC fights were anything goes, they needed some that were big and could stop the fights. John turned out to be the perfect candidate.

He would make his officiating debut at UFC 2: No Way Out in 1994. Big John McCarthy large size and demeanor immediately made him stand out to fight fans.

Then he would say the patented catch phrase that he borrowed from boxing referee Mills Lane. “Let’s get it on!”

In the early UFC, there were basically no rules, except for eye gouging. The fighters could do just about anything they wanted aside from killing their opponent.

So since there were no rules, it was John’s job to stop the fighters from killing each other. If a fighter got knocked out or submitted, he would step in to protect them.

In order for Big John McCarthy to be allowed to officiate at UFC 2, he had to get a work release from the LAPD. In the paperwork that he had to fill out to get approved, he had to say exactly what the job was.

At the time, the UFC matches were no holds barred fights, so he couldn’t put that in the paperwork. So instead, Big John McCarthy wrote martial arts referee, but his superiors wanted to know what kind of martial arts?

There was said to be a sports columnist from the LA Times that coined the term beforehand when he covered UFC-1.

Whoever came up with the name, MMA stuck and everyone has referred to it as that ever since.

The UFC gets sold to Zuffa

From UFC 2 to UFC 29, McCarthy was employed within the UFC by Art Davie and Bob Meyrowitz. In 2001, Meyrowitz and Davie would sell the UFC to the production company Zuffa.

The new owners of the UFC were the Fertitta brothers, Loreno and Frank, along with Dana White as the new president. Big John would continue working with the UFC and help further develop the sport.

Big John McCarthy was one of the creators of the UFC’s initial rule set before the unified rules were established.

When MMA started to become a legitimate sport, each promotion at the time had their own rules. This would create chaos within states trying to oversee events as no one promotion’s rule sets were the same.

The athletic state commission of New Jersey was the governing body that would help create the unified rules of MMA. They invited numerous different MMA promotions along with Big John and the UFC to a meeting to create official MMA rules.

All of the rules that are followed today by MMA organizations within the US follow the rules established from this meeting. Everything from the rules against grabbing the fence or kicking a downed opponent to the head.

Big John McCarthy and the 12-6 elbow

During this meeting was where the highly criticized 12-6 elbow rule was established. Something that Big John McCarthy adamantly fought against.

He went back and forth with Dr Dom Coletta on the danger of the 12-6 elbow. The NJ commission actually wanted to get rid of all elbows in MMA, but McCarthy talked them out of doing that.

Dr Coletta still had a problem with one elbow and that was the 12-6 elbow. He and the NJ commission had seen Karate demonstrations, where 12-6 elbows were used to break various objects.

John tried to debate Coletta, but Lorenzo Fertitta told him to back down. From then on every type of elbow is illegal, except for the 12-6 elbow.

Big John McCarthy was not only part of MMA from the beginning, but also during its explosion in popularity. Not only the UFC, but various other promotions from around the world.

Every promotion from Bellator, Strikeforce, Elite XC, Affliction, K-1 Japan, and King of the Cage. Standing right in the middle of some of the most iconic fights of all time.

In 2007, Big John McCarthy would have his first retirement as a referee. This would also be the year he retired from the LAPD after 22 years of service.

Big John McCarthy ventured into fight analysis for a year from 2007-2008. Working for the Fight Network and doing analysis on all of the big MMA events from that year.

He would come out of retirement after only a year from officiating fights. Going to officiate all of the biggest fights in the world.

In 2006, McCarthy would open his first MMA school called Big John McCarthy’s Ultimate Training Academy. It was located in Valencia, California and at the time was one of the biggest gyms in the state that was 2,700 m2.

He would sell the gym in 2015 after owning the academy for 9 years.

After two decades as an official, Big John McCarthy would write his own biography along with help from Loretta Hunt. It was called “Let’s Get It On: The Making of MMA and it’s Ultimate Referee.”

The book was released in 2011 and it documents everything in McCarthy’s life up until that point.

Going over everything from how he got involved in MMA and became the most recognized ref in the world. His biography would become a New York Times Best Seller and would be read by numerous fight fans.

Through his work with the UFC, McCarthy has gotten the opportunity to work within film and television. One of the first tv shows that McCarthy appeared on was an episode of Friends.

In 2018, after 24 years as an MMA ref, Big John McCarthy would retire for a second time. He would then take a job as a commentator for Bellator MMA.

McCarthy has been with Bellator since 2018 and still commentates and gives fight analysis on every Bellator event.

Big John also hosts his own podcast with former Strikeforce champion Josh Thompson called Weighing In. Every week the two go over the latest news in MMA and break down fights from the previous week.

Big John McCarthy has continued his work in MMA with his MMA official training program called COMMAND. It is an intense 2-3 MMA official course that trains MMA officials.

One participant complete the course, they become certified MMA officials through the Association of Boxing Commissions. (ABC)

Not only does COMMAND have courses for referees, but also MMA judges. They hold their courses a few times a year and they fill up fast. https://mmareferee.com/?q=node/11

There is not much to say about Big John McCarthy that nobody has already said. He is a legend in MMA and was a critical part of creating the sport that it is today.

Not only is he the greatest MMA referee of all time, but he helped create the rules of the sport. John’s passion for the sport of MMA helped the sport become what it is today. Mixed martial arts would not be what it is today without the work of Big John McCarthy.

Today, Big John continues his work within MMA as a commentator for Bellator MMA and his MMA podcast Weighing In.