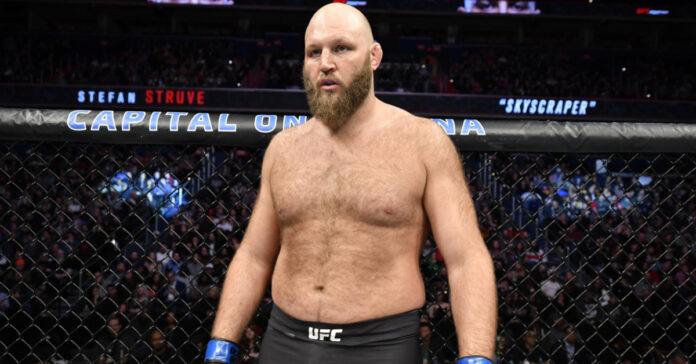 Rothwell departed from the UFC in November 2021 and his debut at BKFC 30 provided him his first return to combat sports action in nearly a year. Rothwell had competed inside the UFC up until last year. His tenure saw him pick up victories over the likes of Alistair Overeem, Matt Mitrione, and Josh Barnett.

He was tasked with taking on O’Bannon in his debut, who entered the bout holding a 3-3 record with all three victories coming by knockout.

Although those watching would have to wait until the co-main event to see Ben Rothwell step foot inside the ring to make his promotional debut, he did not make fans wait long to see exactly what he was capable of.

As soon as the bell sounded Rothwell marched forward towards his opponent landing a combination of punches that would damage O’Bannon. A heavy-handed uppercut would ultimately see his opponent drop to the floor and be unable to return to his feet.

If his performance was not enough to notify the rest of the heavyweight division of his arrival, he made sure his fellow competitors are aware of his presence when he spoke in his post-fight interview.

“I’d say I was going to put the heavyweights on notice,” Rothwell said. “But I believe there’s actually more questions now. That didn’t show it. And I need everyone, if you’re a fan, to let Dave Feldman know and the BKFC know that you want to see what I can really do, and as soon as possible.

“To every heavyweight out there watching, you need to know, you have seen nothing yet.” (Transcribed by MMAJunkie)

Despite Rothwell welcoming any challenger as he begins his new journey into the Bare-Knuckle Boxing world, the former UFC competitor has already stated how he could foresee a potential matchup against fellow former UFC fighter Greg Hardy down the line.