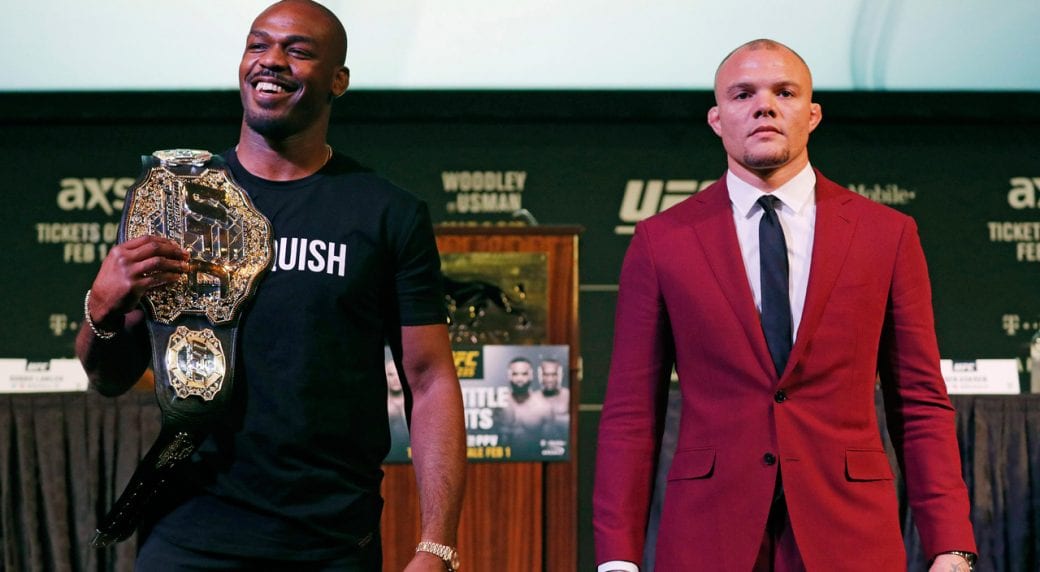 Anthony Smith was not one bit surprised about Jon Jones’ recent comments.

Smith and his family were recently the victims of a home invasion as the UFC light heavyweight contender revealed details of the terrifying experience earlier this month. Although he was eventually able to subdue the invader, Smith notably struggled to do so.

That led to a comment from Jones who was glad Smith was fine, but claimed he would have made sure the home invader wouldn’t have been able to walk if it happened to him. Smith retorted strongly by calling the champion a “douchebag” among other things which led “Bones” to reply with another dig only to delete it soon after.

Smith hasn’t replied to Jones since, but was fully aware of the response which he has come to expect from his former foe.

“I’m not surprised at anything Jon Jones did or said,” Smith told MMA Junkie. “That wasn’t shocking to me at all. That’s just who he is. I can’t imagine too many people were shocked. Typically, Jon hasn’t really come at me too much. I think some of that is, even when I say things Jon doesn’t like, I’m respectful about it and I don’t attack him personally. This is the first time Jon’s ever attacked me personally. If he wants to say I suck at fighting and he’ll kick my ass, whatever. You’re a fighter. You’re supposed to think that. He’s already beat me once. If he wants to say that, whatever. But as far as attacking me personally, this is the first time that Jon’s ever done that. Even when I have spoken on Jon and the things that he’s done, it’s never been from a personal place. It’s been, ‘How’d that action affect him professionally?’ I’ve never really spoken too badly.

“If anything I’ve stuck up for him and put myself in the fire and said I’ve done a lot of the stuff Jon Jones has done. I’ve never fired off a gun in public before, but that’s about the only thing Jon Jones has done that I haven’t done. Steroids and shooting a gun in public. That’s it. Those are the two things Jon’s got me on. So I don’t know where it came from, I don’t know why. But I’m not surprised. I’m not surprised in the media turning it into, ‘Jon Jones vs. Anthony Smith Twitter battle.’ This isn’t a Twitter battle. He said something, I said he’s a douchebag for saying it, he said something else and then we moved on. I don’t have a rebuttal for Jon, because I’m not surprised. I can’t believe anyone is surprised.”

“Lionheart” was also not pleased with the media and how the story turned from what was a scary home invasion for him and his family to a Twitter beef with Jones. At the same time, he understands how the media works and believes this was Jones’ way of remaining in the headlines as he always tries to do.

“I’m more disappointed that the media – I didn’t want to tell the story of what happened in my house, anyways,” Smith said. “If it was up to me I wouldn’t have told anybody. But I’m a public figure and it’s going to come out. If it’s going to come out I would rather have it be on my terms. The way that the UFC, and my lawyer, said that if it’s going to come out all over the goddamn world, then it might as well be coming out of my mouth as opposed to some media outlet with 27 followers writes some bull(expletive) 250-character writeup on whatever bull(expletive) MMA site it is, then it gets twisted and construed then there’s police reports that are super short and one paragraph. I would rather it come out from the source. I’ll tell you what happened. Point A to Point B, that’s how we got there. I didn’t want to tell it to begin with.

“They took a story I didn’t want to tell anyway and took it from this disaster that happened in my house and turned it into Jon Jones vs. Anthony Smith, which is exactly what Jon Jones wanted. That’s why he said something. It’s an opportunity for Jon to get in the media, he does it all the time. Any time Izzy (Adesanya) fights, who do you hear from? Jon Jones. Whoever. Name your goddamn person. Anytime Jon can get some, he’s going to get some. I can’t believe the media was OK with Jon using this opportunity to get his in.”

It’s only a matter of time until Jones responds to these latest comments from Smith.

Do you agree with Smith about Jones trying to keep his name in the headlines?