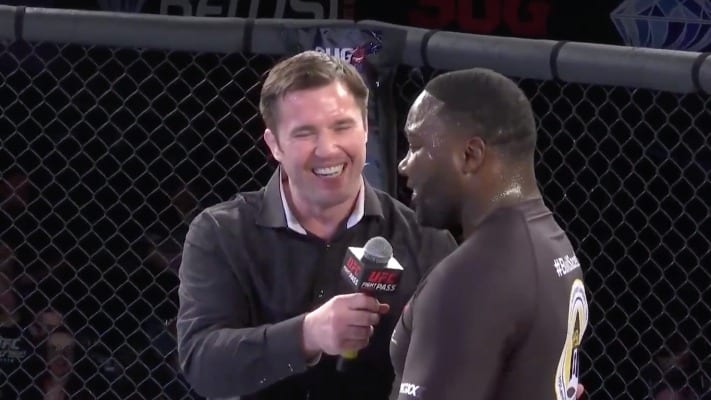 Things didn’t go Johnson’s way, as he was submitted by Jones in 47 seconds via heel hook in Portland, Oregon. After the bout, Johnson was interviewed by ex-UFC title challenger Chael Sonnen. “The Bad Guy” asked Johnson if he still has the drive to compete at a high level. Here’s what he had to say (via MMA Junkie):

“This was just fun for me, man,” Johnson said. “I like competition – win, lose or draw. I still go out there and try my best. Sorry for not being able to perform, knocking somebody out, you know. Grappling, of course, isn’t my forte, but I’m not afraid to do it.

“Just in a fight I’m an entertainer – people want to see me knocking people out. On the ground, I get bored, but I would never get bored against a competitor like Craig Jones.”

Sonnen then asked the question on all mixed martial arts (MMA) fans’ minds – is Johnson contemplating a return to the UFC’s Octagon? “Rumble’s” answer was simple. “If the price is right”:

Johnson hasn’t competed in MMA since April of 2017 when he lost his second opportunity at 205-pound gold. He once again was bested by Daniel Cormier when he was submitted via rear-naked choke, the same method “DC” used to defeat the former welterweight competitor back in 2015 as well.

Aside from Cormier, no man was ever able to defeat Johnson at light heavyweight. He also won his sole heavyweight bout of his career against Andrei Arlovski back in 2013 for World Series Of Fighting (WSOF). Johnson is one of the scariest knockout artists of all time.

With all of the extra mass he has packed on since retiring in 2017, fans are clamoring for a “Rumble” return at heavyweight. Perhaps Johnson’s return is inevitable at this point given the demand from the MMA community.

Do you think the UFC will throw the checkbook at Johnson for a UFC return? Who would you like to see him fight?