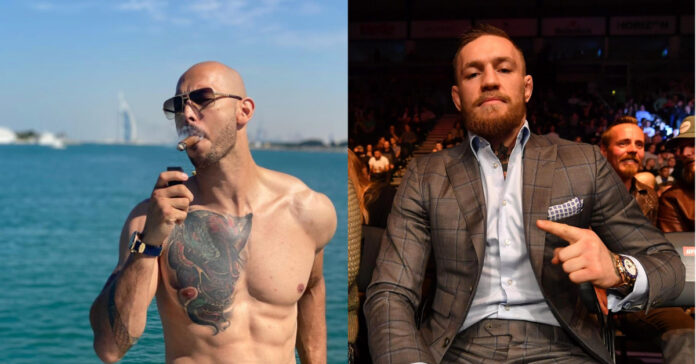 Andrew Tate has shared his potential interest in a fight with former two-division champion Conor McGregor and delved into just what it would take for him to meet the Irishman inside a combat setting.

Cross-platform fights are becoming more common than ever in this day of age. YouTubers are taking the plunge and stepping into the boxing ring to face fellow internet stars or in some cases former combat sports world champions.

One man who is notorious for his profile on the internet is Andrew Tate. A former kickboxing world champion, Tate has been the subject of conversation for many of these speculative matchups given his controversial viewpoints unsettling many people across the world.

Now whilst Andrew Tate has yet to take up any of these opportunities, he has shared his opinion on how he believes many of these potential matchups would play in his favor. Including a matchup against Conor McGregor.

Speaking with Rob Moore, Tate delved into the idea of a matchup with the current UFC athlete and shared his reasoning on what exactly it would take for him to seriously consider an offer for this potential bout.

‘That’s an interesting one, I guess. I mean he is still in his prime, I’m a lot bigger than him. He is very good, very capable. We would certainly have a lot of good trash talk. It would make a lot of money but again I would need a personal problem with him to fight him.’

Whilst Tate would see the interest in a matchup of this kind it appears it is not something he would be actively looking to pursue making it clear he has no type of conflict with McGregor which would make him want to do so.

He would also go on to show his respect and admiration for the Irish superstar.

‘I have nothing against Conor, kind of like the guy so there would have to be a good reason.’

All hypothetical of course, but even if this idea were to come to fruition Tate would have to wait quite some time as McGregor continues his recovery from the devastating leg injury, he suffered against Dustin Poirier at UFC 264.

McGregor is anticipated to return to action in 2023 but as confirmed by Dana White, just like any athlete who is taken out of the USADA testing pool, the Irishman would need to submit six months of clear samples before he is able to return to competition in the UFC.

Would you be interested in a potential fight with Andrew Tate and Conor McGregor?