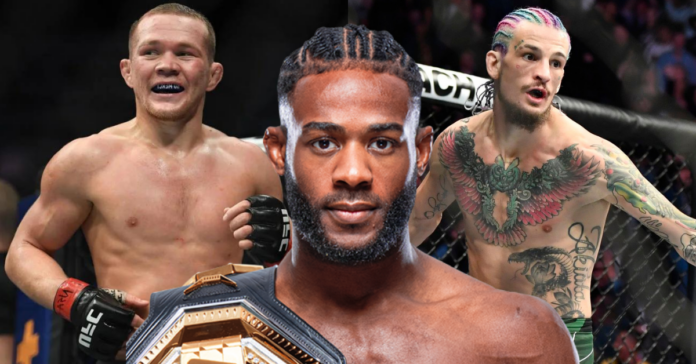 The undisputed champion Aljamain Sterling will keep a close eye on his fellow bantamweight’s competing on the main card this Saturday night. ‘Sugar’ Sean O’Malley and top-ranked Petr Yan will be facing off at UFC 280 while ‘Funk Master’ meets TJ Dillashaw for the bantamweight world title.

While speaking to The Fighter vs. The Writer, the Jamaican-American Aljamain Sterling athlete offered his prediction for Yan vs O’Malley. He explained that it is an incredible opportunity for the colorful-haired ‘Sugar.’ Sterling said:

“Honestly, it’s a win-win for O’Malley. I know he said he’s not looking at it like that, but it’s a great opportunity stylistically. I think in a three-round fight, his chances of winning go up astronomically.”

Sterling has met Yan in the octagon, twice, and is familiar with his style. The 33-year-old explained that the Russian may struggle to handle the footwork from O’Malley. Aljamain Sterling added:

“Yan starts slow. He gets over-aggressive like he did against me in that first round and gets picked apart from the outside and banks on trying to catch you later on. I think that’s going to be an ill-advised mistake, because O’Malley’s good, he’s got great footwork. I think he has all the tools needed to win.” [Transcript courtesy MMAFighting]

The UFC bantamweight champion also added that ‘Sugar’ is largely untested in MMA. The Tiger Muay Thai trained Yan will certainly be a stiff test for the American fighter. Sterling continued:

“The only question mark I have for him is the toughness. When Yan actually touches him up a bit and keeps chipping away, will he wilt or will he stay there and compete? That’s my only reservation with that matchup. I just have no idea how he’s going to fare when he gets some opposition pushed back at him.”

Overall, though, the Serra-Longo trained athlete is picking his old adversary Petr Yan to out-point ‘Sugar’ Sean. He added:

“I don’t know which way that fight’s going to go, but if I had to pick, I’m going with Yan. I just think he’s a little bit more experienced and he’s going to know how to make those adjustments because he’s had to have made them before on the biggest stage, which were title fights and five-round fights.”

Will the winner of O’Malley and Yan get the title shot next against Aljamain Sterling if he defeats Dillashaw? It’s not that simple, Sterling explained:

“If O’Malley wins, I take out T.J., I’m extremely happy with taking on that matchup. Whichever happens, I’m going to be excited for either opportunity. Obviously with Yan, I’m not going to be as excited because we’ve seen each other twice already for damn near 10 rounds. I think we’re good on this one for a little bit longer at least. We’ll see. I like pay-per-view. I like money.”