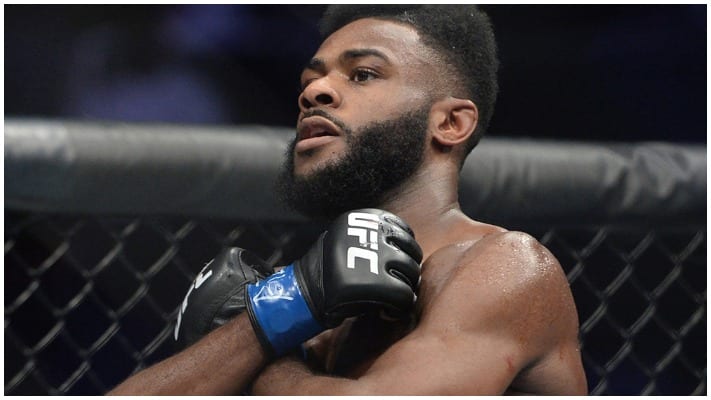 UFC bantamweight title challenger Aljamain Sterling wants his fight against Petr Yan to be bumped into the main event slot after Amanda Nunes’ withdrawal forced the headliner to be scrapped.

UFC 256 was meant to be headlined by a women’s featherweight title bout between Amanda Nunes and Megan Anderson, with Sterling and Yan serving as the co-main event. However, it was announced on November 9 that Nunes would no longer be able to make it to the December 12 event. That fight is expected to remain intact and be rescheduled for a later date.

Following the news of the drop out, Sterling took to Twitter to let it be known that he feels his fight is deserving of the top spot.

Sterling has earned his title shot on the back of a 5-fight winning streak over some of the divisions top names. He most recently picked up a first-round submission over Cory Sandhagen at UFC 250, and he also has wins over Pedro Munhoz and Jimmie Rivera during his run. Yan, on the other hand, will be looking to make the first defense of his bantamweight title, which he won after dominating the legendary Jose Aldo.

With UFC 256 coming up in a month, it appears that the UFC will have few options to fill the main event spot. While bumping Yan vs Sterling into the headlining role might seem like the obvious choice, neither main has proven to be a PPV draw and the UFC usually likes to end the year with a bang. There are a number of big-name stars the UFC could call upon to fill the spot – Conor McGregor chief among them – but it’s unlikely any would be willing to do so on such short notice.

Whoever does eventually get the headlining role may not consider themselves so lucky. The spot has seen a bit of a curse, as it originally belonged to Kamaru Usman, who was set to defend against Gilbert Burns. Like Nunes vs Anderson, that fight was delayed until 2021.

Hopefully whoever does get to headline the card makes it to December 12, and Sterling and Yan are able to have an exciting fight, regardless of where they are placed.

Do you think Aljamain Sterling should headline UFC 256 against Petr Yan? Let us know!