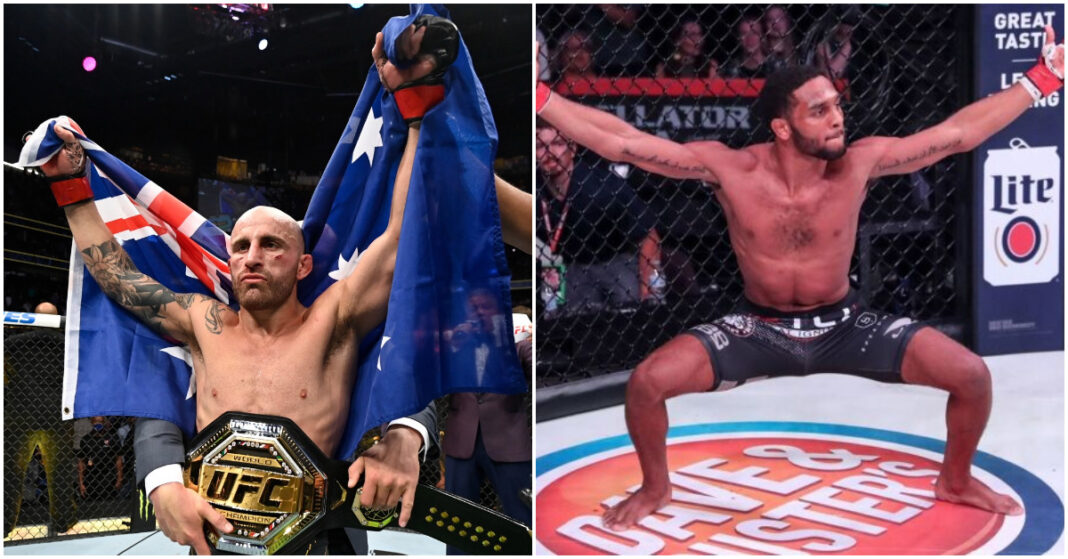 As one of the most dominant champions in the division, Alexander Volkanovski has solidified his place as one of the featherweight greats of all time. ‘The Great’ put on a commanding performance in his last outing against Chan Sung Jung ‘The Korean Zombie’ to win by TKO when referee Herb Dean was forced to intervene and put an end to the lopsided competition.

While most members of the community were impressed by Volkanovski’s performance, one individual who was not was the former Bellator featherweight champion AJ McKee, who defeated Patricio Freire by a guillotine choke technical submission to win the belt last July. The 27-year-old American faced ‘Pitbull’ in a rematch earlier this month that saw him lose his title strap and get the first defeat of his career by unanimous decision at Bellator 277.

McKee “wasn’t impressed” with Volkanovski’s performance at UFC 273 and lambasted the Aussie fighter for not responding to his call-outs for a cross-promotional fight.

Speaking to The Post at his team’s new Bangtao Muay Thai & MMA gym in Phuket, Alexander Volkanovski shared his thoughts on the call-out.

“I didn’t see it because I was on the [victory] tour and I was busy. But yeah, the only reason I knew about it is because people said he was saying this and that, and then I got told he lost,” Volkanovski said. “It just makes me chuckle in a sense, but at the same time, you can’t hate on these guys or what that’s a part of. They want to hype things up and build themselves up. It’s promotion, it’s marketing, it’s how some people approach it.

“So you can’t hate them for it. It’s just a job they think they need to do, but sometimes it makes you laugh when things don’t go to plan when they run their mouth like that.”

The current featherweight king understands McKee’s reasoning behind the statements and commented on whether he believes a cross-promotion bout makes sense.

“Cross-promotion is hard to think about,” said Volkanovski. “I don’t think it will ever happen, so I just worry about what I need to. But if it does, I’ll love it.

“I’m a fan of the sport. I have all my social media, they’re involved with MMA, and a lot of these things come up. Whenever there’s a big card or promotion I like to tune in and watch.”

On a 21-fight win streak after UFC 273, Alexander Volkanovski is lapping the division beating out competition like Max Holloway more than once to stay at the top of the featherweight food chain. The pound-for-pound number two reinforced his call for a UFC lightweight title shot as he eyes entry into the exclusive ‘champ-champ’ club.

He has not made his plans to move up a weight class a reality yet and insisted he will wait to see how the upcoming fight between champion Charles Oliveira and challenger Justin Gaethje plays out.

“I’d love it. We’ve got to see if it can work and the timing and everything like that, but it’s something I think is gonna be in the near future,” he said. “It would be great to be my next fight, but if I have to wait long for it and wait for this or that to happen, I’d rather fight and do that later on.

“I plan to hold this belt for a long time, so the move up can be whenever. But I just want it to be soon because I feel like I’ve earned it.”

Do you want to see Alexander Volkanovski move up a weight class and take on the champion?