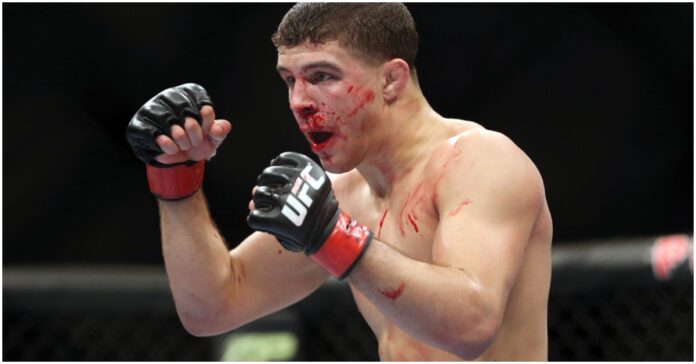 Al Iaquinta hasn’t confirmed that he is retiring but has admitted that hanging up the gloves has become a serious option.

After two years out of the UFC following his record of 1-3 with losses to the then champion Khabib Nurmagomedov, and fan favourites Donald ‘Cowboy’ Cerrone and Dan Hooker.

‘Raging’ returned to the Octagon at UFC 268 to fight fellow lightweight Bobby Green, but it wasn’t the return he was hoping for as he was TKO’d in the first round.

Speaking on his YouTube channel “Call Me Al Show” the one-time lightweight title challenger revealed that he is almost certainly done with MMA.

Iaquinta admits that mentally he quit at UFC 268 and just wanted out of the fight.

“To be honest with you, I don’t know, it was the first fight that I really gave up in,” Iaquinta said. “He didn’t knock me unconscious. I turned, and I covered up. I was still conscious, I knew what I was doing, but I kind of just wanted out. I realized he hit me hard, and it probably wasn’t gonna be a good night for me. I was not confident in my preparation. …

“It’s the first time in my career ever that I gave up in a fight. I used to watch people do that all the time, and I could never understand it. But at this point, it’s not life-changing money for me to go in there. When you’re younger, injuries happen and you heal. I’m 34 years old. You go in there, you get an injury, there’s a good shot it’s never gonna heal. Doctors, I used to think you get surgery, and they fix it. Doctors can fix anything. I don’t ever want to have surgery again.” (Transcribed by MMA Junkie)

The rise of Al Iaquinta

Iaquinta’s first mainstream exposure was in 2012 when he was competing on the “The Ultimate Fighter 15”.

Even though he lost in the lightweight final to Micheal Chiesa he was still signed to the UFC and made his debut in 2013.

Everybody’s favourite Estate Agent would then make a storm through the lightweight division going 8-1 with wins over Kevin Lee, Jorge Masvidal and Diego Sanchez.

Then getting the last-minute replacement fight for the lightweight title against Nurmagomedov, Khabib would dominate the fight but large parts but Iaquinta impressed people with his toughness and ability to force ‘The Eagle’ to strike with him in the later rounds.

Do you think Al Iaquinta should retire?