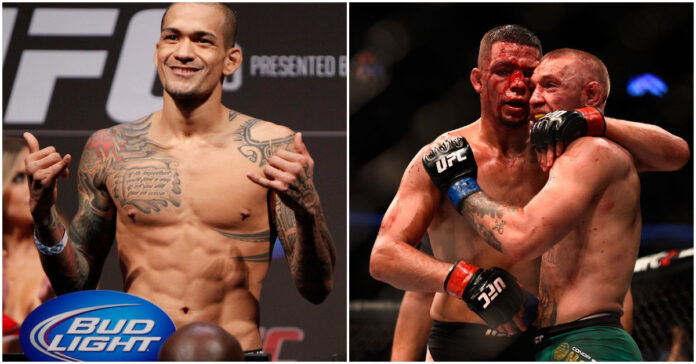 Ahead of his fight with Emmanuel Sanchez on April 23 at Bellator 279, Yancy Medeiros spoke to LowKick MMA about his debut fight in Bellator. He’ll be competing in his hometown of Hawaii for the first time after 13 years and is excited to put on a show for the fans. Filled with positive energy, Medeiros personifies volumes about what it means to be a true Hawaiian as he shares the addictive Aloha energy with us.

Medeiros revealed that he’s on a one-fight deal with Bellator for the bout and the two parties will need to negotiate a new deal to keep him in the promotion. Amidst the fighter pay debate and contract controversies, ‘The Kid’ shared that Nate Diaz wants to be a free agent first and foremost.

Talking about the importance of brand and approaching the fight game from a business angle, Medeiros said that Diaz poked fun at the organization in a recent series of tweets where he suggested he wants to fight in Bellator and even retire after completing the last bout on his contract.

Diaz indicated an interest in fighting Dustin Poirier who also seemed willing for the showdown. However, UFC president Dana White shut down the talks of a possible fight between the two even when both are considered to be big draws in the sport.

When asked about a potential match against Conor McGregor, Medeiros explained that Nate Diaz would rather fight his way out of the contract than get a third fight with the Irishman, for whom he will need to wait a few months and possibly have less leverage in negotiations from a business standpoint.

Yancy Medeiros developed a bond with Nick Diaz that only got stronger over the years. Although both fighters have different personalities, the jubilant Hawaiian struck a friendship with the straight-up Stockton native with his friendliness and genuine way of carrying himself. As authentic as they come, Medeiros spread a message of love and peace, of being a killer with the biggest smile on.

He spoke highly of Nick Diaz and compared his wisdom to the likes of Gracies, the single most influential family in mixed martial arts. Diaz played the role of a mentor in Medeiros’s life educating him in the gym and outside of it to reach optimal levels. He got Medeiros into following a plant-based diet, helped him cut weight to compete at lightweight instead of light heavyweight, and coached him about attaining peak condition.

Nick Diaz has remained a fan favorite in the sport despite a six-year hiatus following his suspension after the Anderson Silva fight, and his brother Nate Diaz enjoys similar status due to their charismatic personalities. Medeiros believes Diaz to be a savant and reinforced how much he learns from him.

Will Yancy Medeiros get the win at Bellator 279? Should Nate Diaz get free agency or should he wait for the trilogy bout?