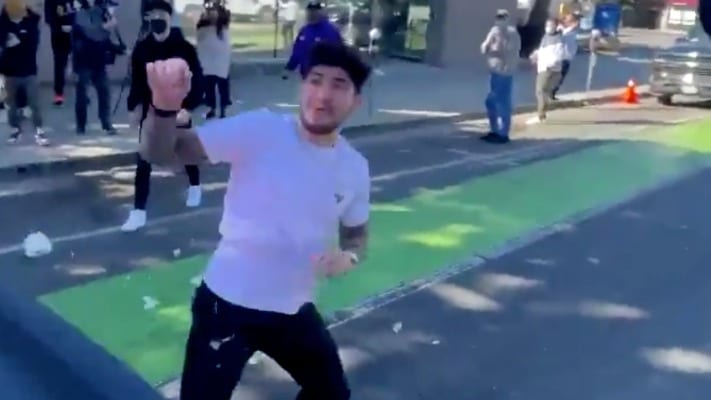 Jake Paul escalated his rivalry with Dillon Danis to a new level.

The popular YouTuber has recently been calling for a fight with Conor McGregor in the wake of his recent knockout win over Nate Robinson. However, another name he’s been calling out is Danis and on Tuesday, he drove by him on the streets as the latter was filming an episode of Food Truck Diaries with Brendan Schaub.

Paul started off by calling him “Conor McGregor’s little b*tch” before throwing junk at him including a water balloon while calling him a number of expletives. As the Bellator fighter approached the car, Paul and his gang sped off with Danis throwing a piece of junk back at them.

You can watch the moment below:

“Caught the biggest shit talker slacking @dillondanis you gotta check in when you come to La. #GenerousDriveBy”

Danis has since responded by mocking Paul speeding away just as he approached them.

“Dip dip dip,” he wrote referencing what Paul said to his driver.

It appears Paul is hellbent on getting a boxing match with McGregor but in reality, it’s unlikely that the Irishman would even pay attention to the American, let alone fight him.

Instead, Danis would be a more suitable and realistic option and after what went down today, it certainly seems more likely to happen.

What do you think of Paul’s stunt on Danis?