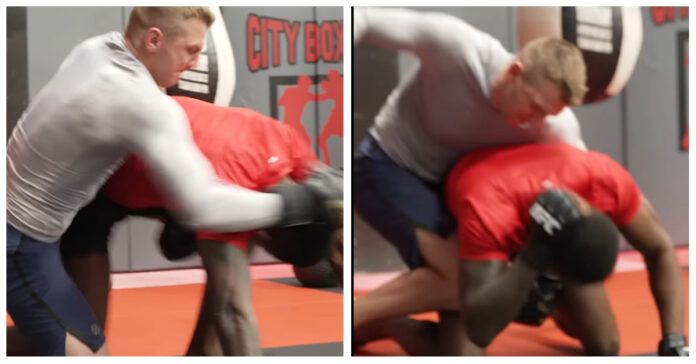 Dan Hooker is helping Israel Adesanya prepare for his next title defense against Jared Cannonier at UFC 276.

City Kickboxing standout Dan Hooker has been on a skid in his professional career. Following a three-fight win streak between 2019-2020, he dropped four of his last five bouts with a sole win coming over Nasrat Haqparast last September. ‘Hangman’ is still on the good side of the UFC as he’s continued to show up and make the sacrifices necessary when called upon.

Now, Hooker has been helping UFC Middleweight king Israel Adesanya prepare for his next challenge.

‘Stylebender’ is slated to take on Jared Cannonier at the T-Mobile Arena in Paradise, NV on July 2 at UFC 276. The headlining bout is expected to be a marquee entry for the promotion as it takes place during International Fight Week, traditionally known to host the better cards of the year.

In a video uploaded to FreeStylebender, Hooker can be seen training with his teammate working on some ground and pound drills.

Adesanya appears to be struggling with keeping up with the pressure from his fellow Kiwi although it is in training so not the full story is known.

The reigning 185 lbs champion in the UFC has proven his dominance in the division with multiple wins over top-ranked contenders and former title holders such as Marvin Vettori, and Robert Whittaker. Adesanya goes into the bout as the favorite over ‘The Killa Gorilla’ and has expressed plans to replicate a performance similar to the one against Paulo Costa.

Both men utilize a striking heavy approach and are expected to put on a show for the fans. Cannonier expects it to be a “striker’s delight” while many fave backed Izzy to come out unscathed from the contest.

Another great middleweight matchup on the card is that of Sean Strickland vs. Alex Pereira. The Brazilian is the only athlete to hold a knockout win over Adesanya, and if the stars align well enough they could be facing each other soon.