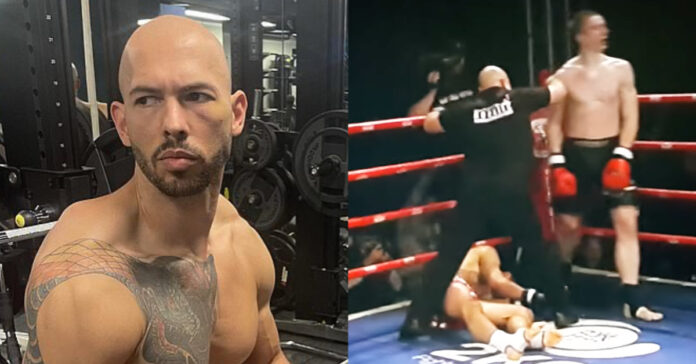 A recent video of social media star Andrew Tate being knocked out during his kickboxing career has gone viral, with many people enjoying seeing the 35-year-old hit the canvas.

While many people are new to the controversial personality that is Andrew Tate, long before he made his mark with the use of his influencer marketing and clickbait comments, Tate was able to maintain a successful kickboxer career holding a record of 43-9.

Despite reportedly selling television advertisements in 2009, Tate was able to pick up impressive victories over former British Super-cruiserweight Champions Ollie Green and Mo Karbo, before, challenging and beating Paul Randall for the vacant ISKA English Kickboxing Light-cruiserweight title in Derby during April that year.

Andrew Tate gets knocked out by Franci Grajš

During the Enfusion 3: Trial of the Gladiators tournament, Andrew Tate was able to participate to determine the #1 Kickboxer in the world at 85Kg.

Although Tate was able to find a way to the final, the internet sensation was bombarded by a series of punches before being caught by a first-round flying knee from his opponent Franci Grajš, which left him bouncing face first off the canvas.

Since then, Andrew Tate has blossomed into a mainstream social media attraction for his outlandish and unconventional content.

Although ‘Cobra Tate’ is retired, he has recently been linked with a potential return to combat sports, with the likes of Bellator’s Dillion Danis and undefeated YouTube boxer Jake Paul biting at the chomp to bring Tate out of retirement for a big money fight.

Would you like to see Andrew Tate make his return to professional combat sports?